As Christmas approaches (and they are very, very close), solidarity events such as L3tcraft that is taking place right now through Twitch they jump to all screens, whatever type they are. And it is that, like it or not, these are dates in which the majority have (we) the sensitivity a little more on the surface than the rest of the year. They are dates that are liked and that hurt a little in equal parts, and in which, therefore, initiatives of this style have a plus that, without a doubt, affects their performance. I know it may sound cold, but it is an indisputable reality.

Be that as it may, every year we can see how new events of this type are added, in order to support the most diverse ends, and ranging from campaigns to support a specific person, to associations and / or groups that, for whatever reason, they need our support. Such is the case of the Directo Solidario Juegaterapia 2021, with which the talent agency L3tcraft, for 24 hours this weekend, intends to lend a hand (and a big one, of course) to an association that undoubtedly deserves it.

L3tcraft’s direct solidarity is already a classic at this time, and year after year it has not stopped growing, with exceptional results in terms of the support obtained. Upon reaching its equator, that is, the first twelve hours of broadcast (the broadcast was paused at dawn from Saturday to Sunday and has resumed today at 12:00 noon) L3tcraft had already managed to raise more than 60,000 euros:

At the time of publication of this news the counter has increased to 62,858 euros, and there are still many hours ahead. Hours in which, for example, we will still see a highly anticipated moment of this l3tcraft. I am speaking, of course, of «Revienta a Tonacho», a moment in which the more than popular youtuber / streamer and, also, founding partner of L3tcraft, will see how the donations of the participants have a second objective: to make him suffer with physical exercise. It doesn’t take Nostradamus to guess that donations will grow substantially at that time.

Although the most popular faces of the solidarity live of L3tcraft are Alex el Capo, Chincheto and Tonacho, as in previous years they have been accompanied by many other extremely popular streamers and youtubers. To give just one example, in one of the parts of yesterday’s live dedicated to Minecraft, ElRichMC and Rubik (two eminences in creating content about Mojang’s game) added their sand dune (reducing it to the point seems unfair to me) to the goal of supporting Juegaterapia.

If you do not know Juegaterapia, which is more likely if you are not from Spain, you should know that the association that L3tcraft supports with this event, develops its activities in the children’s oncology areas of hospitals, providing the children who are in them, as the name suggests, therapy based on games. I think there is no phrase that better summarizes the role of the association than the motto “Chemo playing flies by.”

During his eleven years of life, with Mónica Esteban at his headto, Juegaterapia has managed to build a solid and highly valued public image, which has led the association to have a presence in different media with initiatives such as “The garden of my hospi”, with which Juegaterapia converts spaces, generally terraces, of hospitals with children’s oncology areas, into spaces specially equipped for the most children, in which they can “disconnect” from the hospital environment, even though they have not really left it.

The garden of my hospi of the Hospital Universitario La Paz, Madrid. Image: Play Therapy

Since I learned about Juegaterapia, as it happened with the Aladina Foundation, their names always evoke in my head the occasion when, visiting a loved one (who has already left) in a hospital, I saw a child walking next to whom, I supposed, was his mother. The boy was holding a wheeled IV pole attached to a line that appeared to be on his arm. He wore a knotted handkerchief covering his scalp, which, however, he imagined depopulated at the time. Since then, and many years have passed, I have lived with a lump in my throat.

L3tcraft’s Directo Solidario Juegaterapia 2021 connects me, therefore, with that child who was walking through the corridors of La Paz. And I am very, very lucky, because that is the closest experience I have had with childhood cancer (it costs even to write it). I know of other people who have lived it closer, and initiatives like this one from L3tcraft deserve special recognition, as they are a reminder of this that, in addition, reaches much younger audiences in a very direct way, creating an awareness that, in my opinion, is essential.

It goes without saying, but I have no other relationship with L3tcraft beyond my admiration for their work, and I think it is necessary to make this clarification before encouraging anyone who is reading me at this time to spend, even a few minutes, on the Direct Solidarity, to know the work of Juegaterapia and the support of L3tcraft for it. And it is more: if you can, donate. No matter the amount, one euro counts, five euros count, 10 euros count. Any contribution, no matter how small, will add up.

Can See the Live Solidarity Juegaterapia 2021 of L3tcraft on your Twitch channel, and you will find the link to donate in the channel panels. And if you can’t donate, I still personally recommend that you don’t miss out, especially if you like Twitch live streams. And it is that the variety of the event makes it the most enjoyable, with talks, dissemination, games (some donors will be able to play Fall Guys with the event streamers). And if you are one of the people who enjoyed Mundo Chiquito at the time, then all the more reason. 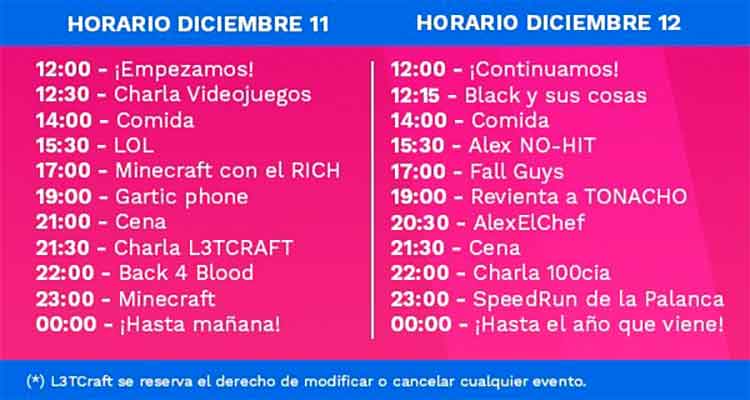 realme GT Master: the excellent 5G smartphone goes to 234 € before the winter sales