Second Wikipedia party games encourage social iteration, are easy, quick to prepare and of limited duration. Goblin Horde fully fits into this description, it is a party game (all Italian) by dexterity, strongly interactive, fast, suitable for large groups and different age groups. Certainly not the ultimate party game, but certainly worthy of the name. We are sure that with the right company and a few rounds of beer (for adults!) It will give you great satisfaction!

The box of Goblin Horde contains:

The cards they are linen, rather to read, but it must be considered that they are mixed only once per batch so their consumption is very low, it is not necessary to pack them. The illustrations and symbols of the Goblin cards are very clear and intuitive and the same can be said of the various abilities described. Same situation for the Adventure cards, clear and easy to understand, never any doubts during the game.

The bag of fabric at first left me puzzled: it cannot be closed, it is a bit tight and must contain the treasure cards, so you have to put the cards in the bag in a rather orderly manner otherwise they don’t fit and can be seen during the draw .

How to Play Goblin Horde

Based on the number of players, give the relative amount of Goblin cards to each, each player chooses a Goblin, places it face up in front of him and passes the remaining cards to the left. Proceed like this until all the cards have been placed on the table.

Now paid all the Goblin tiles in the center of the table and draw a number of Treasure tiles from the bag equal to the number of players minus one and place them on the table. Then, at the same time, all the players, with one hand, must search the pile of Goblin tiles, those that belong to their newly formed tribe. At first I thought it was a useless rule, instead it allows you to transform a boring part of the game such as the search for tiles to be attributed to the various Goblins, into an important part of the game: the first to complete his tribe gets the best treasure and is even the first player (even if he changes hands every turn)!

Unchosen Goblins are set aside while those belonging to the various tribes end up in box of the Horde (the one with the round hole). Put all the Patacca tokens on the table and give two to each player. At your fingertips you have the treasure bag, the Adventure card deck, the Goblin deck and the Tome of Quests. 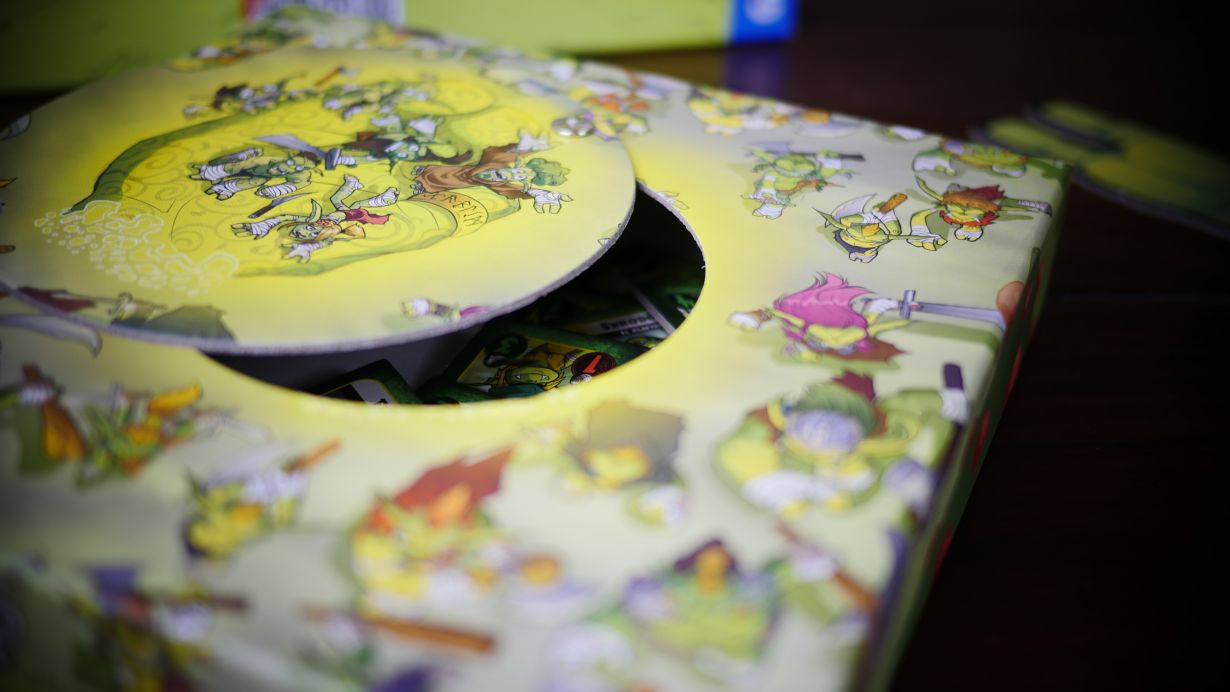 The carrying out of the game is very simple: at each turn, the first player draws an Adventure card, reads the number at the bottom left and reads the related adventure on the Tome of Quests, where it is explained in detail what must be done and what rewards are awarded.

Trials generally ask you to create one patrol of Goblins: each player makes one of his Goblins available through a draw from the Horde Box. The Goblins can be eliminated from the game during the various trials and if a player runs out of Goblins at the end of the turn he draws two from the deck and takes the relative tiles to be able to continue playing. However, at the end of the fourth adventure, a three-card mini draft is run to replenish the players’ tribes. 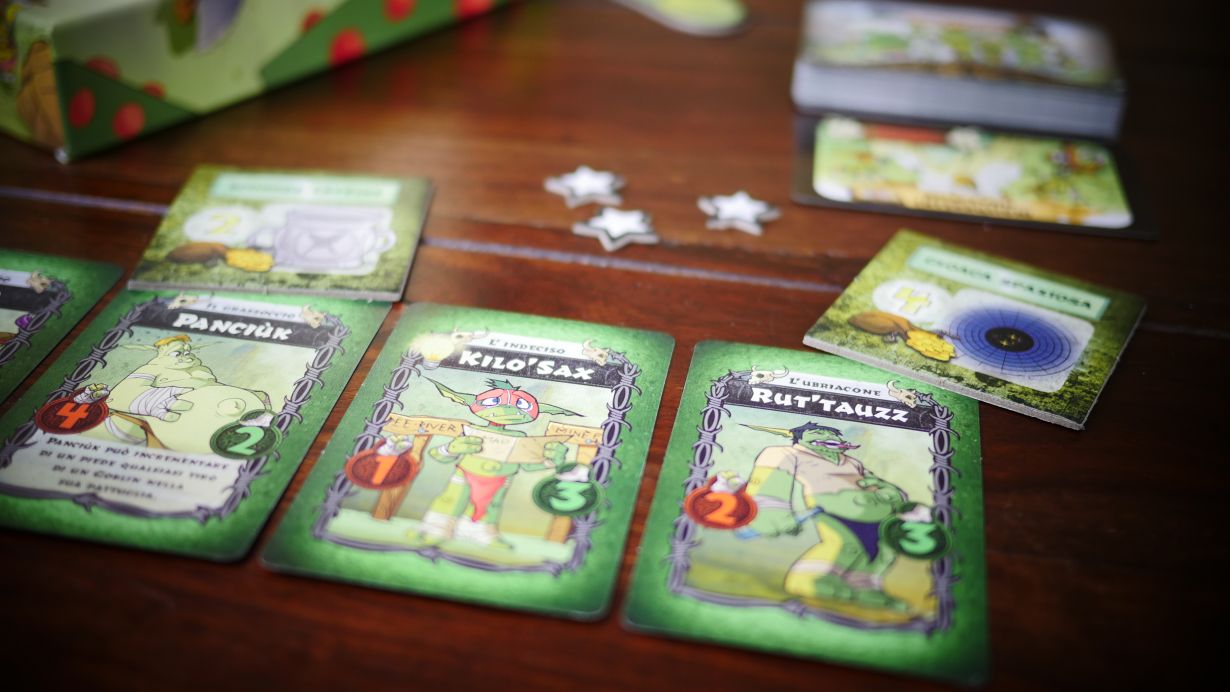 The evidence that you will face can be of three types:

Ferocity or Escape: they are the tests of manual skills, the real center of the fun of the game! You have to flipping the Goblin card holding it on the thumb trying, for example to throw it into the box, or, resting on the table, launch it with the index finger trying to bring it closer to a given target.

Morra Goblin: instead of the classic paper, scissors, stone, we have scrub, slingshot, okkio.

The match ends after the adventures indicated for the number of players have been played. To determine the winner, each player adds up the number of Patacca tokens, the number of their surviving Goblins and the value of the accumulated treasures: whoever gets the most points is the winner.

Goblin Horde is a party game where thealea it has mostly been put aside and one focuses on one’s own manual skills, there is very little strategy, you simply have to win the challenges that the game puts in front of you and better manage the skills of the Goblins of your tribe.

L’interaction it’s very high, you play all together, you don’t have to wait for the others, it’s engaging and never boring.

There longevity it is good, there are 35 different types of “challenges” and if some are repeated because they simply allow you to manage the tribe or treasures, nothing prevents you from inventing new ones by exploiting the environment around you or other objects outside those present in the game box. 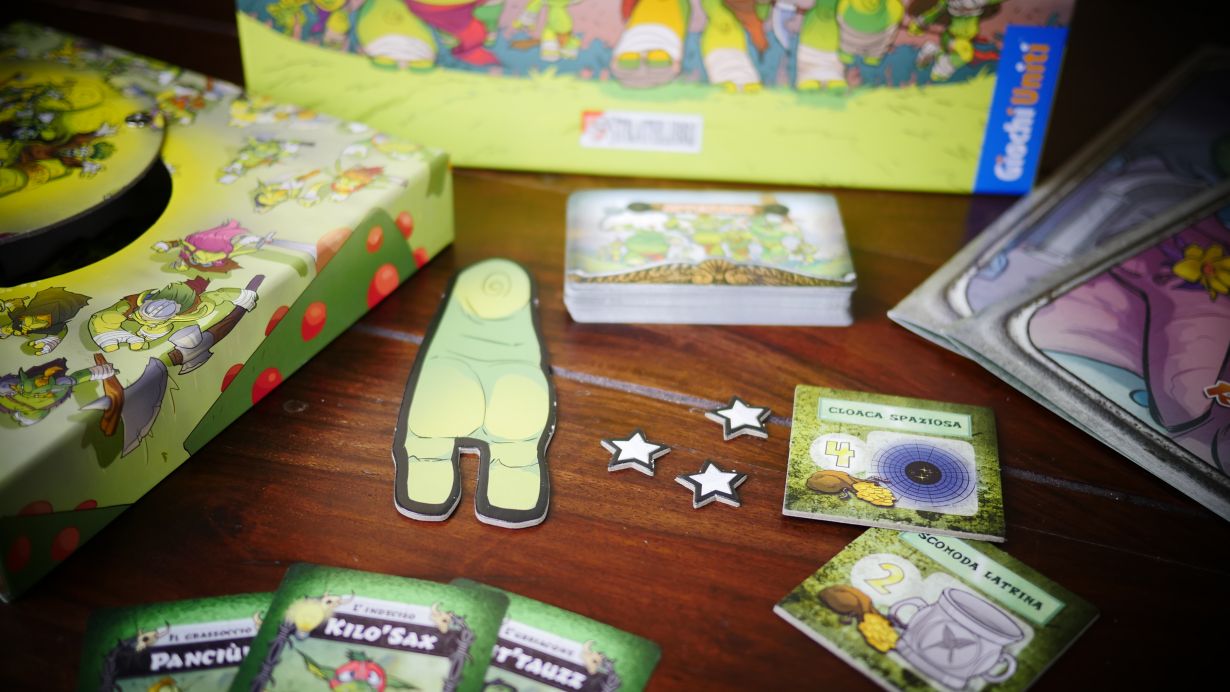 The rules are simple, quick set up. Frankly, I don’t see any major flaws that make me turn up my nose. Obviously you must like the kind of experience that a game like this brings to your evenings, I repeat, it is a party game, pure and simple. If you are looking for more serious stuff, turn off, if you want to alternate a few evenings easygoing or you want to attract new players to the world of board games, then it could be the title for you!

Goblin Horde is a very fun party game where luck has no place: only your skill will make you lords of the Goblins!

Not suitable for “serious” groups

LEGO Titanic: the biggest set ever is ready to sail (but without sinking)

Dungeons and Dragons 5E: the authors of Dragonlance announce a new setting