A few days ago we attended a special event where NVIDIA introduced the DLSS 2.3, an evolution of its well-known AI-based intelligent image reconstruction technology that, as our regular readers will know, runs through the tensor cores. This means that, to be able to use it, it is necessary to have a GeForce RTX 20 series graphics card or higher, and a compatible application or game. Currently, the DLSS supports more than 130 applications and games.

One of the main advantages that DLSS 2.3 has over traditional rescaling technologies is that, by using artificial intelligence, you can always keep learning, and improving. With this new version, NVIDIA has confirmed that the ghosting problems that occurred in some titles based on DLSS 2.1, such as DOOM Eternal and Cyberpunk 2077, have been eliminated.

Ghosting is a problem that occurs with certain elements in motion during the image reconstruction and rescaling process, and that can generate, as we can see in the attached images, a kind of trail on certain objects. It is very difficult to appreciate in motion, but thanks to DLSS 2.3 technology it has been possible to reduce it drastically, thanks to a better utilization of motion vectors, a key piece to accurately reconstruct and rescale graphic elements that constantly move between frames, thereby improving image quality. 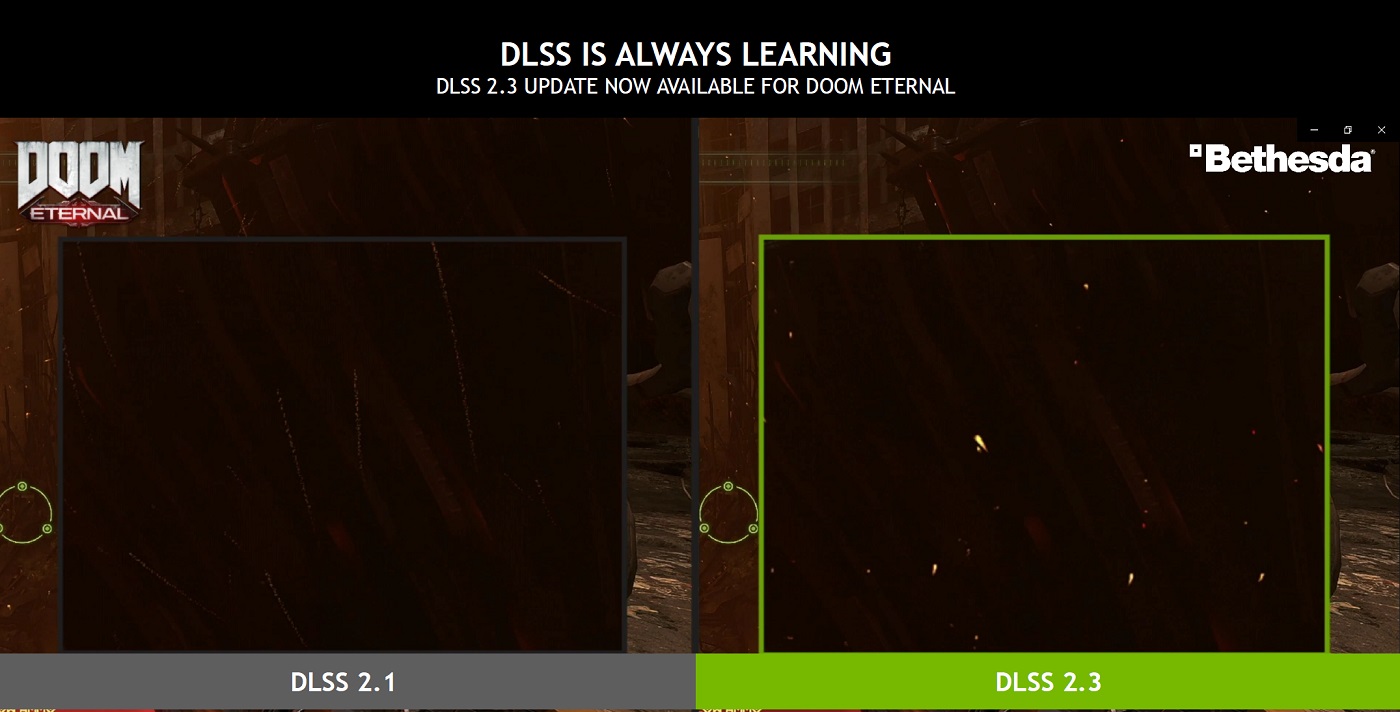 The attached images speak for themselves. In Cyberpunk 2077 we see that the “ghosting” effect that was produced in the car’s rear view mirror disappears completely, while in DOOM Eternal this problem was mainly seen in the effects of fire particles, and thanks to the DLSS 2.3 it almost completely disappears . I think it is important to highlight one thing, and that is that the results that NVIDIA achieves with the DLSS they are so good that you can afford to polish details as small as these.

In order to enjoy DLSS 2.3 we won’t need anything special since it will continue to be compatible with GeForce RTX series 20 and series 30 graphics cards. Of course, it is important to keep the graphics drivers of our card updated to be able to access all the news that NVIDIA is launching, including DLSS 2.3.

DLSS 2.3 and spatial rescaling of the image: Different solutions for each player profile 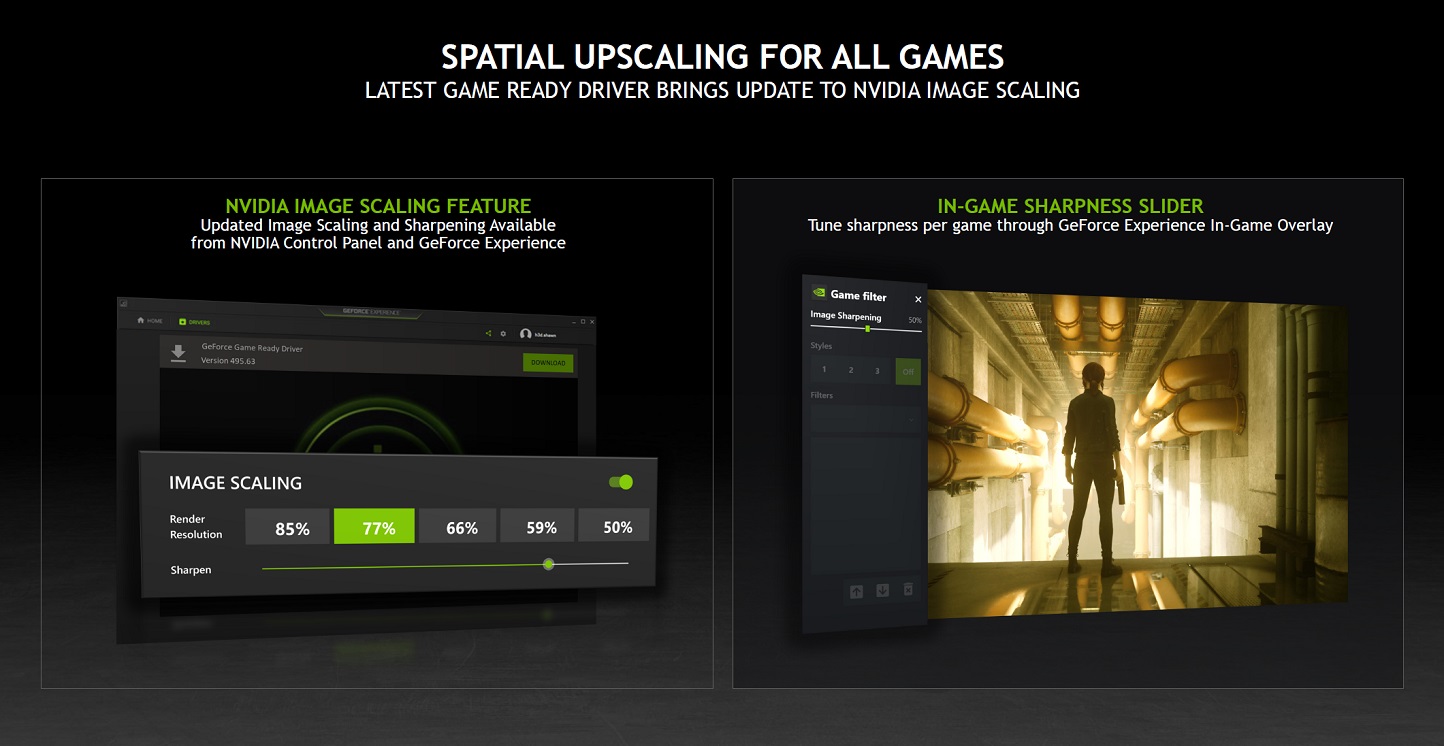 In a personal capacity, I think DLSS is one of the best things that has happened to the world of PC gaming in the last few years. I have had the opportunity to test it with different graphics cards, including from a modest RTX 2060 to a powerful RTX 3080 Ti, to different RTX 30 Mobile solutions, and my overall experience has been fantastic. Not only is it capable of improving image quality when working in quality mode, but it also improves performance to such an extent that an RTX 2060 may be able to achieve very good FPS rates in games set at maximum and in 4K.

However, the DLSS has an important peculiarity, and that is that, in order to enjoy it, we need to have, as we have said, a graphics card that has tensor cores. NVIDIA is aware that not everyone has an RTX 20 or RTX 30 graphics solution, and that rescaling today offers greater value than ever, especially because it allows to extend the useful life of a graphics card, and improve the user experience in titles where fluency is essential. 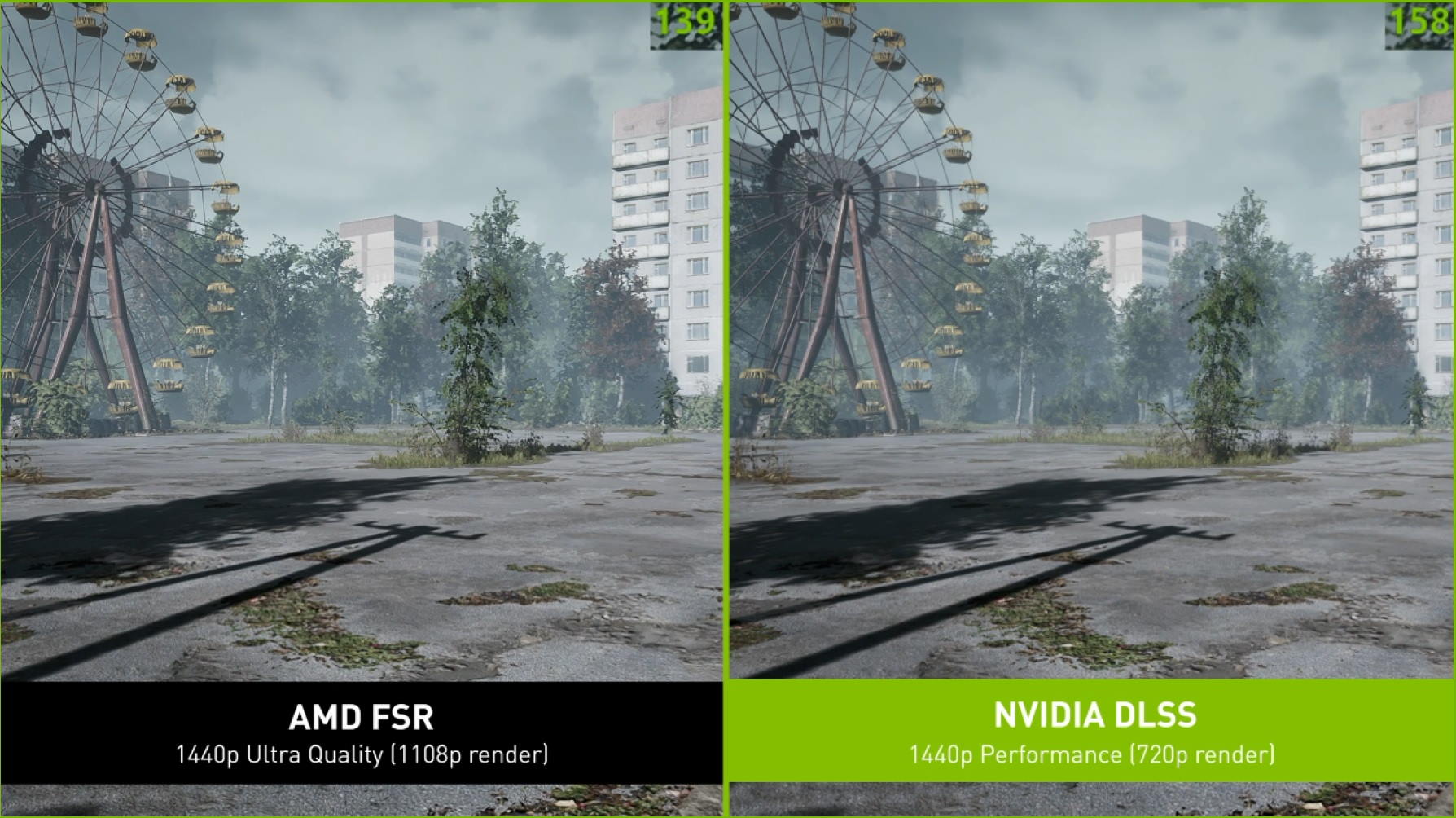 Despite working in performance mode, NVIDIA’s DLSS achieves better image quality than FSR, especially in the most complicated details, such as ferris wheels. Click to enlarge.

The arrival of AMD’s FSR generated great expectations precisely because of this, because it was outlined as a solution for spatial rescaling that did not require specialized hardware, and because it added a layer of enhancement that allowed to counteract, in certain situations, that smudging effect that occurs when we rescale using a standard spatial technique. 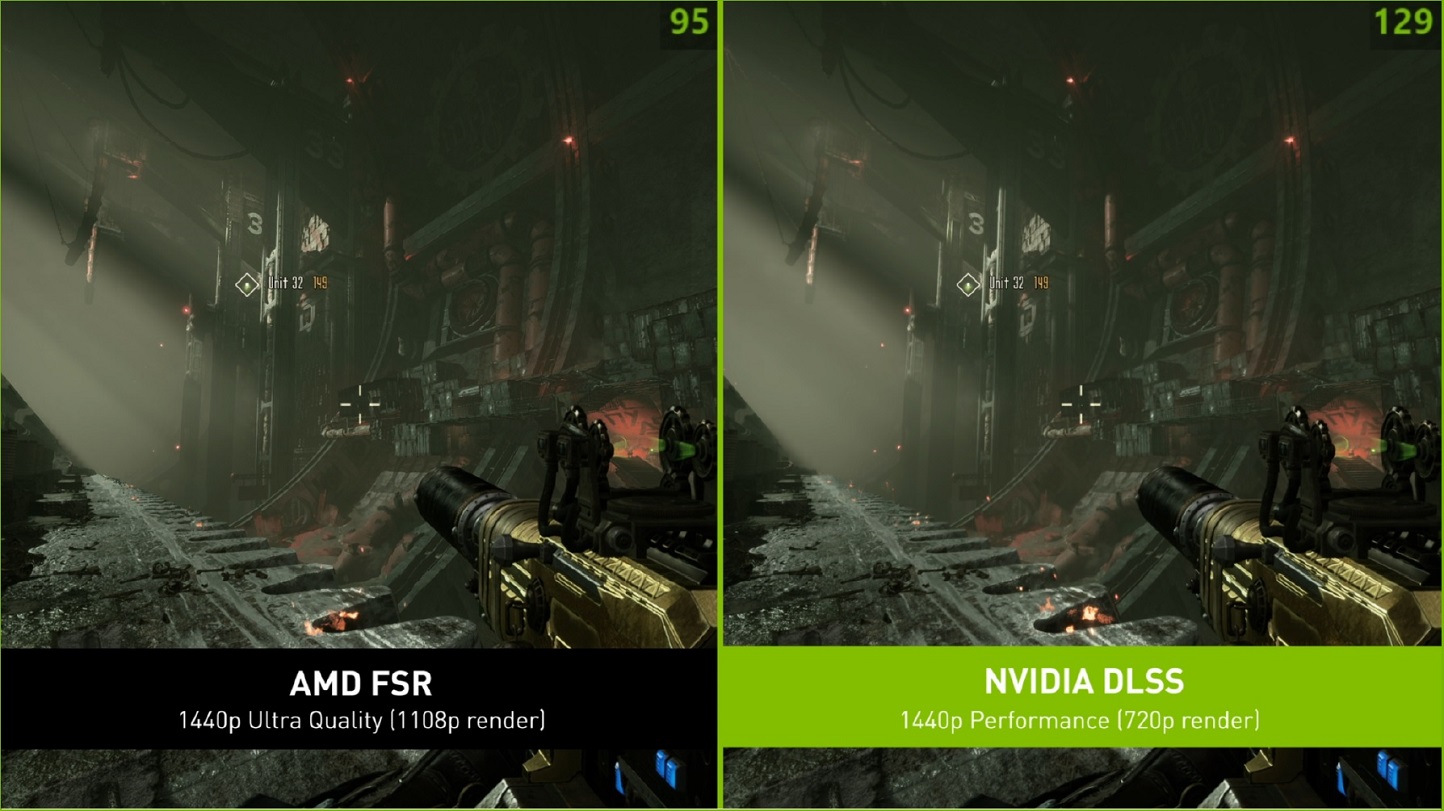 In this case we also see that the DLSS maintains a superior image quality, and takes care of the extreme to the smallest detail, such as the lava particles on the side. Click to enlarge.

NVIDIA has not stayed to see them coming, and has introduced a technology of next-generation spatial rescaling which, according to the company, is the best of its class, and that it also uses an enhancement filter to improve the final finish. This rescaling is integrated into a new development kit that is available from today on GitHub, and that, as we can see in the attached images, manages to maintain a higher definition and a higher level of detail compared to AMD’s FSR. And this is not all, it also registers slightly better performance.

We can adapt this new rescaling to any situation, thanks to the different base resolution options that we can choose from, and the intensity of the enhancement layer that will be applied at the end. Ultra quality mode starts from 85% of the total pixels that we would have in the native resolution, and we can reduce it to 77%, 66%, 59% and 50%. It is important that you bear in mind that, by reducing the pixel count from which this rescaling starts, it is possible to considerably improve performance, but it will also reduce image quality.

What are the differences between DLSS 2.3 and NVIDIA spatial rescaling?

NVIDIA Spatial Rescaling uses a fixed algorithm and part of the current frame to generate the next one. This leaves us, as we see in the attached image, a 2.2 million pixel base count in 1440 resolution under ultra quality mode, and an output image of 3.5 million pixels, which is generated by a fixed algorithm. 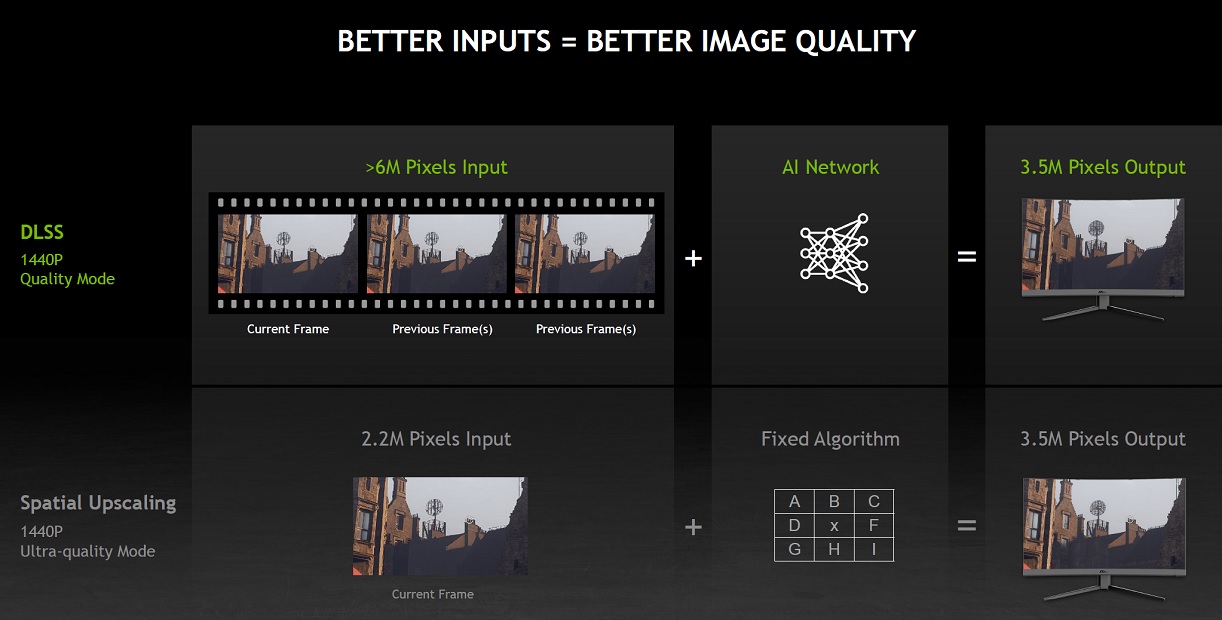 With the DLSS 2.3, however, the image is generated using temporary elements, that is, it uses both the current frame and previous frames, which leaves us a base count of more than 6 million pixels when we use the DLSS 2.3 in 1440p and configured in quality mode. Artificial intelligence is used to generate the final frame, and the end result is that 3.5 million pixel image.

The fact that DLSS 2.3 technology starts with a greater number of pixels, and that it uses previous frames (temporary elements) together with AI to combine them and create the best possible image makes a huge difference, as we can see in the attached image. Spatial rescaling achieves a fairly good result, although there is an obvious loss of sharpness compared to the native resolution, and we also see problems with the disappearance of distant elements, something common to all spatial rescaling techniques. 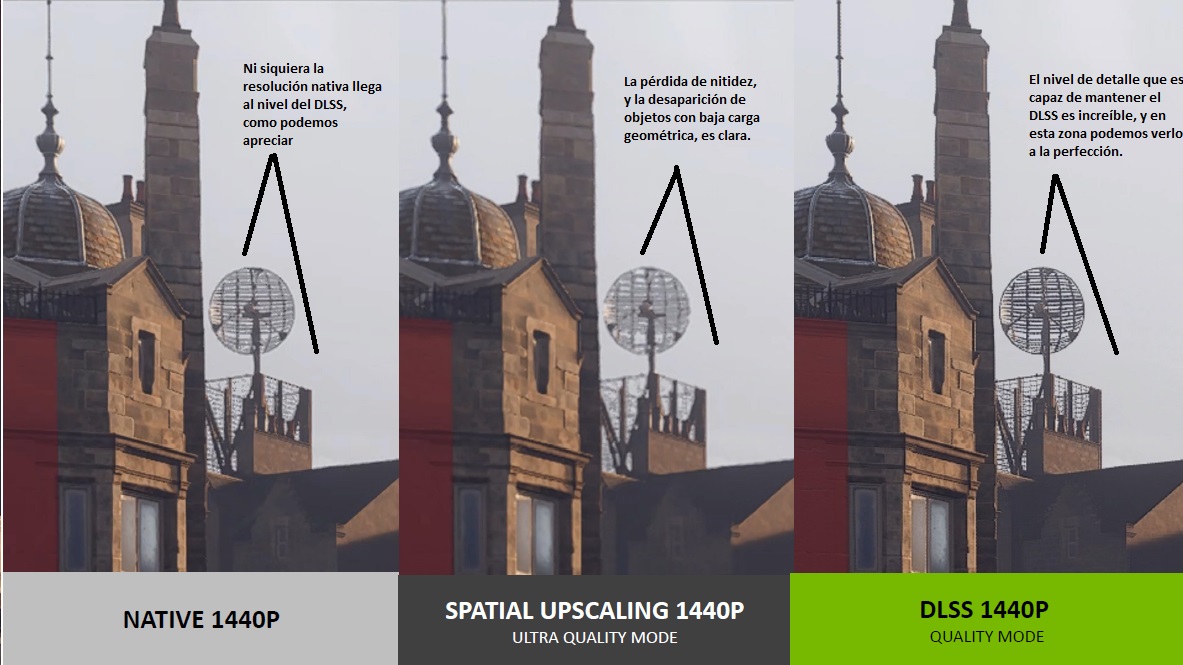 In contrast, the NVIDIA DLSS 2.3, configured in quality mode, achieves a spectacular result, since it generates a sharper, more detailed image than that obtained through native resolution, and with exceptional quality even in elements that have a low geometric load, such as those that are thinner and more distant (the grid, for example). 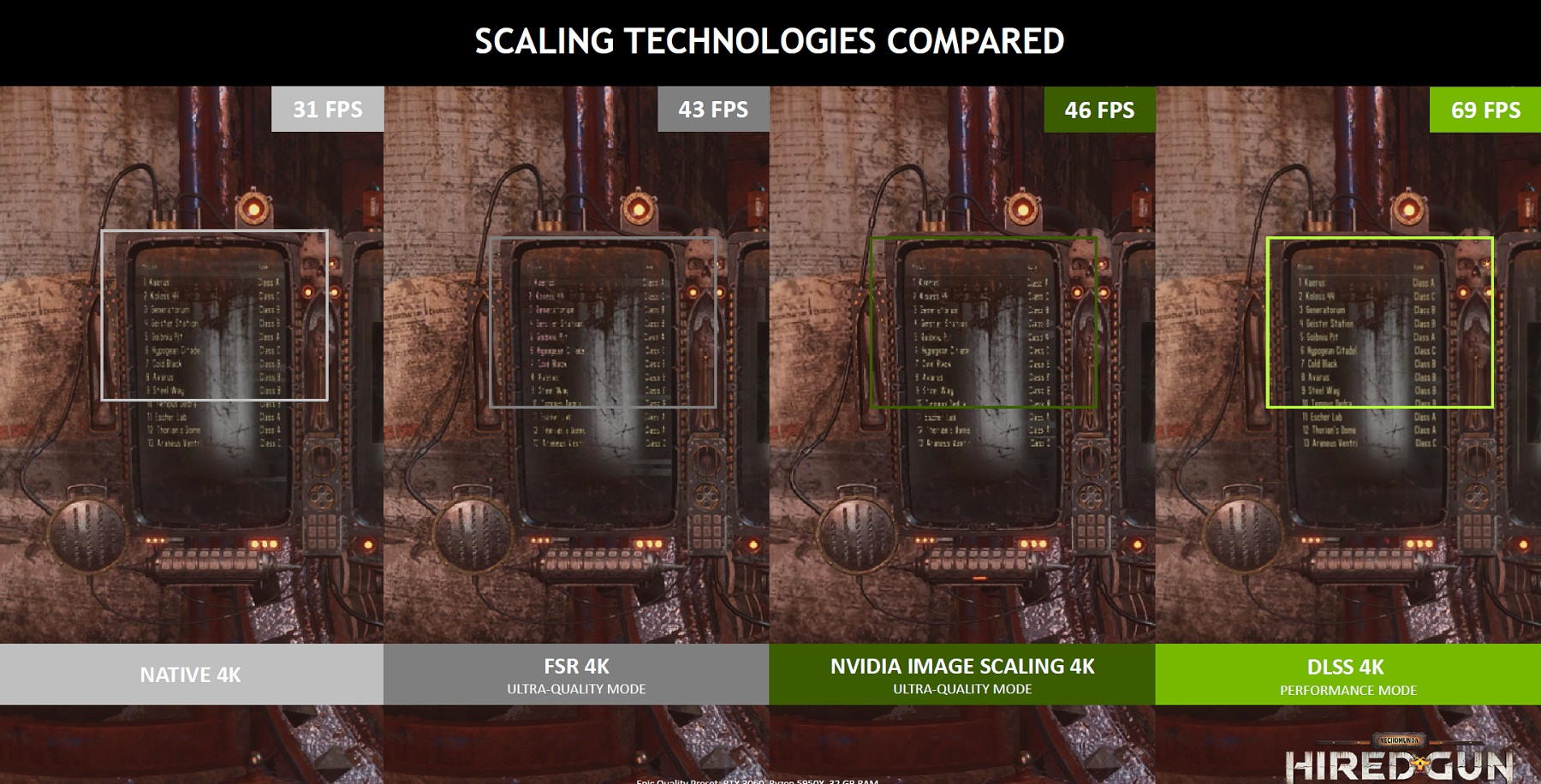 This is what I have told you on other occasions, DLSS is not a simple rescaling, is an intelligent image reconstruction technique that uses temporal elements and artificial intelligence, and does not do so with the aim of creating a rescaled image, but with the goal of achieving the best possible image. We must not forget, in addition, that this technology uses vectors of movement, and with this it is possible to avoid important problems such as excess noise in the image, pixelation, blurred and out-of-focus finishes in moving objects, as well as artifacts and disappearance of elements. graphics.

The difference between DLSS 2.3 and spatial rescaling is so great that the former can offer, even in performance mode, a quality superior to rescaling in ultra quality mode and achieve, at the same time, a much higher performance, as we can see in the attached image. The DLSS 2.3 offers a much greater sharpness, and represents without problems even those elements further away that have a low geometric load, you just have to look at the grid, for example.

NVIDIA spatial rescaling will be available for all GeForce graphics solutions that have driver level support, and it can be activated through the GeForce Experience control panel. If you have, for example, a GTX 1070 and you want to try it, you will only have to update the graphics drivers and voila, you will have it available. Keep in mind, of course, that a spatial rescaling is only really recommended in resolutions 1440p and higher, since at lower levels we run into a very low sample base, and maybe a bottleneck at the CPU level.

How do night surveillance cameras work?