Potion Craft, or the art of preparing potions through alchemical knowledge: we tried the preview of this video game and we talk about it. The game developed by niceplay games and published by tinyBuild puts us in front of cauldrons, mortars and stills, in this simulation that wants us to live the life of a medieval alchemist. Through a careful choice of natural ingredients, to which we can add effects given by minerals or our specific preparations, our aim is to make a name for ourselves in the practice ofalchemy. We will refine the techniques, we will improve our tools and our notes, but always with an eye to our pockets, because after all there is a shop to run!

Potion Craft: our review of the alchemical indie game

Potion Craft has been available since last September 21 on Steam, for now still in early access. The fact that it is still in beta is not in the least noticeable during gameplay, were it not for the fact that there are still many aspects and possibilities “locked”, which will be made available later. But what awaits us in the future of this alchemical simulator we will mention later: for now let’s focus on what is there.

We begin our “adventure” by occupying the old alchemist’s house in the town. This mysterious predecessor of ours has left us, in addition to accommodation, an old ramshackle still down in the cellar but above all an enchanted garden at the back, where we find most of the ingredients for our concoctions, fresh every morning. Yes, because in Potion Craft time is divided into days. Every day a certain number of customers will knock on our door, served which we will only have to go to sleep in the upstairs room waiting for a new day of work and the growth of new plants in our garden.

The complexity of our alchemical preparations is simulated through a two-dimensional map. With each preparation, the vial that indicates the effects of our potion starts from the center. Each mushroom, herb, root or plant we add makes it move in a certain way. The aim is to end the “movement” on certain areas, in turn shaped like a vial, which represent the effects we can give to the potions. The higher the degree of precision with which we finish the movement, the better the quality of the potion will be.

To determine the movement on the alchemical map we have some systems. The main and most important one concerns the ingredients: each has its own “path”. Some are curved, others zigzag, still others cross or come back on themselves. By pounding the ingredients in the mortar we can unleash their power to the maximum, which means being able to make the most of the displacement they guarantee us. This also allows us to save on raw materials, but it will not always be the case. Much of this aspect of the game, in fact, lies in being able to move precisely to the effect we want for our potion. Additionally, we can also “stretch” our potion by adding water (and other liquid bases later in the game) to get more movement. 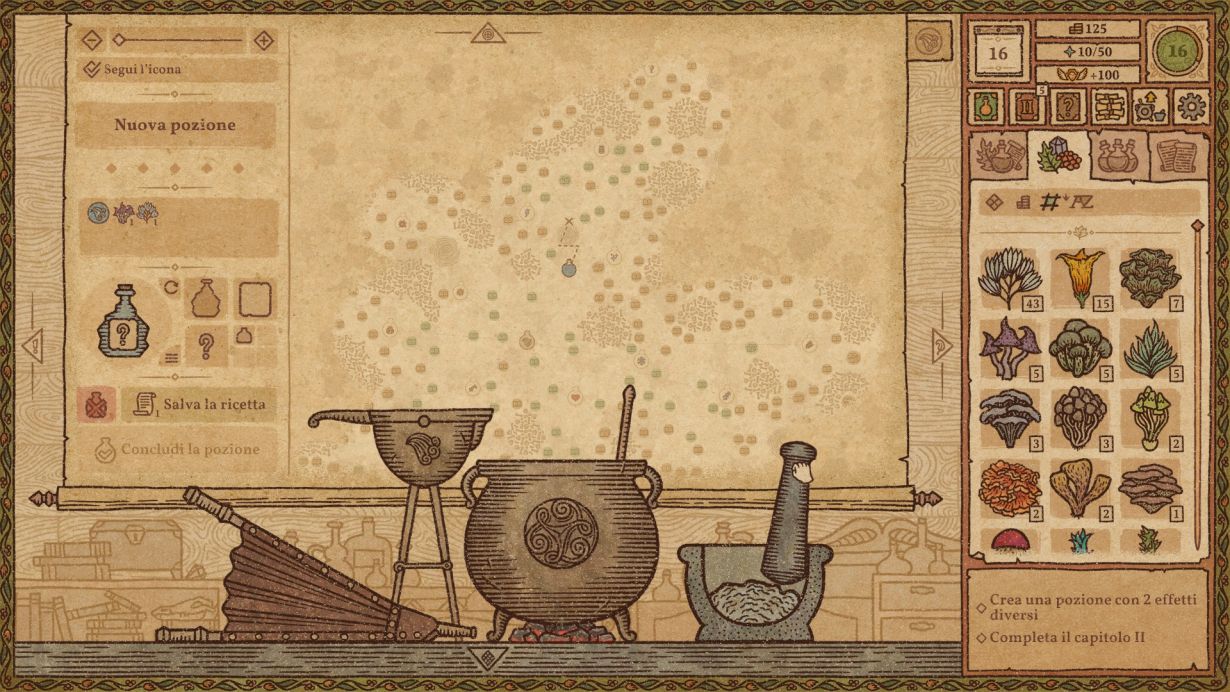 I realize that the explanation is a bit abstract, but I guarantee you that the mechanism of creation of the potions is absolutely immediate, and understandable as soon as you point the mouse over it.

Higher quality potions represent not only greater earnings, but also a faster rise in our popularity as alchemists. Finally, a third feature affects our work: reputation. Occasionally customers will arrive with not-so-benign intentions: these villains, however, will be very clear in their statements. This will give us the possibility to choose whether to serve this clientele, so as to be considered honorable and responsible alchemists, or potionists who “I sell a product, it is not my fault if they then use it to poison the neighbor”. And we understood each other …

Potion Craft is a very original and interesting game. The basic idea is singular, and done in a really good way, especially considering that we are dealing with a title that it is still in early access.

The game’s graphic design renders the sense of the setting very well, with many clickable elements on the screen often striking. The mortar to be pounded “by hand”, the cauldron that must be mixed with precision, the recipe book (which allows us to quickly and automatically create the most common recipes) but also the “windows” of the game interface that can be navigated as if we were in a real house: everything denotes a remarkable care in the realization. Things like customizable bottles, or being able to arrange the potions ready on the counter, push us to experience the game with the necessary calm, even a little at a time, without rushing to the philosopher’s stone, but enjoying the journey.

The background music, with medieval tones reminiscent of a quiet ballad accompanies us serenely. However, perhaps some slightly different sounds, especially related to the actions we are doing on the screen, would have made everything a little more varied.

The clientele, very different and always with new “stories” about why you need this or that potion, makes a game experience a little more sparkling and lively which, after a few hours, however, begins to become repetitive. To get out of the routine “take the order – create the potion – sell it” it is probably necessary that some of the functions that are still off-limits to players are made available. 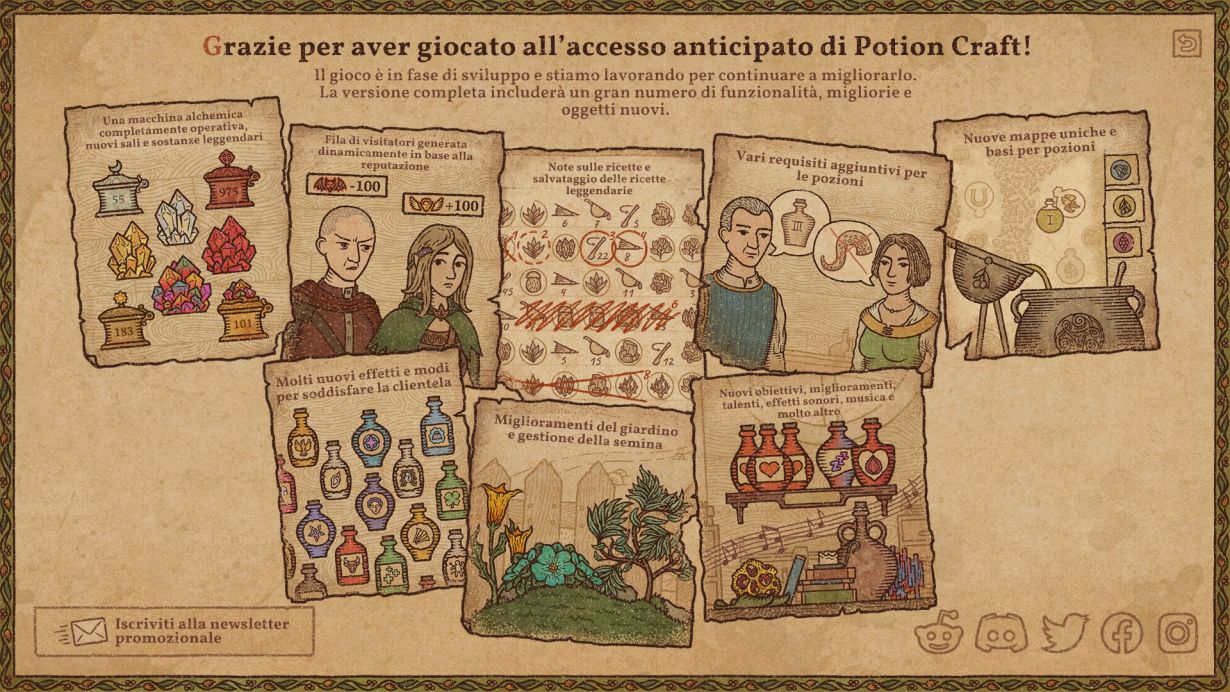 Although the alchemical map system is particular, its exploration does not differ too much from what we see at the beginning. It reveals itself slowly with real “experiments”, exploring the best routes and discovering new potions, but without surprises. In addition, the map always remains the same in all games, designed and not randomly generated in order to increase replayability.

Staying in the semantic environment of the game: for now we could say that Potion Craft is a well made potion, but in order for its effects to become even stronger, some ingredients are missing. However we are confident, because what we have seen so far bodes well, especially for the cure almost monastic which shines through in many aspects of the game.

In particular, a piece of advice on how to deal with the experience: you are alchemists, behave like alchemists and not, with all due respect, like simple counter operators. In addition to making the game too repetitive, taking on Potion Craft in this spirit does not help to fully enjoy all the potential it offers. After all, any alchemist, as a child, did not dream of selling rat poison or sunburn ointments, but of turning lead into gold.

Potion Craft is on Steam at the more than honest price of 12.49 euros, fully (and very well) translated into Italian.

Potion Craft is a very special game that has been able to make the alchemical practice original but immediate. From a technical point of view the game is (already) done very well, including the already complete translation into Italian. For now our evaluation of Potion Craft is good, but destined to increase if the guys at niceplay games manage to guarantee greater variability to the title (for now a bit repetitive in the long run) with the functions that will arrive soon.

A lot of freedom of choice for our journey in alchemy

In the long run a bit repetitive

For now still many functions not available

PlayStation Plus: announced the free games of September 2021

Our Broken Majesty: the new Dreamlord RPG and NoDove are available