For connoisseurs, it is no secret that the integrated graphics of the M1 Ultra and the NVIDIA RTX 3090 do not play in the same league. Since the Apple processor supports technologies such as Mesh Shaders, Variable Rate Shading, DirectStorage, Ray Tracing and many others. Not to say they don’t have the raw computing power. Also, now we have the proof in figures.

Apple is a special case, as it is the only designer of ARM register-set chips used today for personal computers and workstations. Being the M1 Ultra complex, made up of two interconnected M1 Pro chips, the most powerful of all. Nor can we forget how those from Cupertino have been charging one kidney and part of the other since their origins in terms of the prices of their products. Not in vain, even with the price swollen by mining, we find that with the price difference, that of a Mac Studio with an M1 Ultra and an RTX 3090 for PC that we would even have money left over to assemble the entire PC. So one would expect that a higher price will justify better performance. Unfortunately, with the company originally founded in the garage of Steve Jobs’s parents, this is not the case.

As Carl Sagan said, extraordinary claims require evidence of the same caliber. Apple’s statement was none other than to say the M1 Ultra’s integrated GPU is much more powerful than the most powerful graphics card on the PC, which at the time of making said presentation was the NVIDIA RTX 3090 and continues to be. 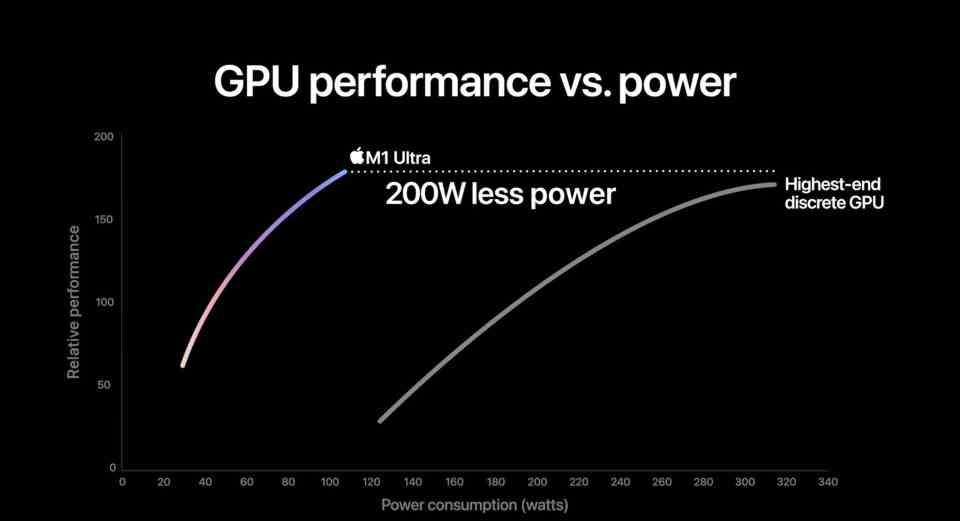 Although we can argue that it refers to energy efficiency, you only have to look at the ordinate axis that they showed in their presentation to see what Apple was really saying. In any case, they have never given a single piece of information in the form of full graphics specifications for the top-of-the-line Mac Studio. Therefore, performance tests have had to be carried out, something that The Verge has done and where reality can be seen. To begin with, this can be seen in the Geekbench 5 computing test that measures only the calculation capacity of the graphics card, where you can see how the RTX 3090 triples the M1 Ultra in raw performance. And if we go to the games, we can see how in Shadow of The Tomb Raider the NVIDIA graphics manages to get up to 40 FPS more than the most powerful Apple chip. What’s more, it stands out to see how the Mac Pro based on a custom RX 6900 also takes a considerable distance from Apple’s most powerful processor at the moment.

All of which begs the question, what if graphics card prices and shortages weren’t affecting the PC hardware workstation market? Objectively speaking, Apple lost the high-end performance race a long time ago and we don’t think it will regain it for a long time.

Core 12 processors will increase their price more than 10%

Can I use NVIDIA GeForce Experience software on Ubuntu?