Changes and news of the new firmware version

This new version of the popular Asuswwrt-Merlin firmware incorporates very important new features, especially we have improvements and profound changes in virtual private networks with OpenVPN, because it incorporates the new VPN Director. VPN Director It is a software added to the ASUS firmware that replaces the original ASUS routing policy and that we had so far, in this way, all the routing policies of the different VPN tunnels will be managed from the same menu. This menu is similar to the popular VPN Fusion that we have available in the original ASUS firmware in some of its routers, in this way, we can configure the routing policies of PCs or subnets easily and quickly, without having to go to OpenVPN client for OpenVPN client configuring the routing part.

VPN Director and the Asuswrt-Merlin firmware will allow us to register up to a total of 5 OpenVPN clients, this is ideal for establishing tunnels to different OpenVPN servers in order to route the traffic of one or more clients through it. Let’s imagine that we have several OpenVPN clients connected to different VPN services from different countries, with VPN Director we could change the output of the Internet connection of one or more wired or wireless clients in a transparent way for these devices, this is ideal for smart TV or devices that do not allow the installation of an OpenVPN client or that is very complicated, such as a TV Box and other devices with similar characteristics. 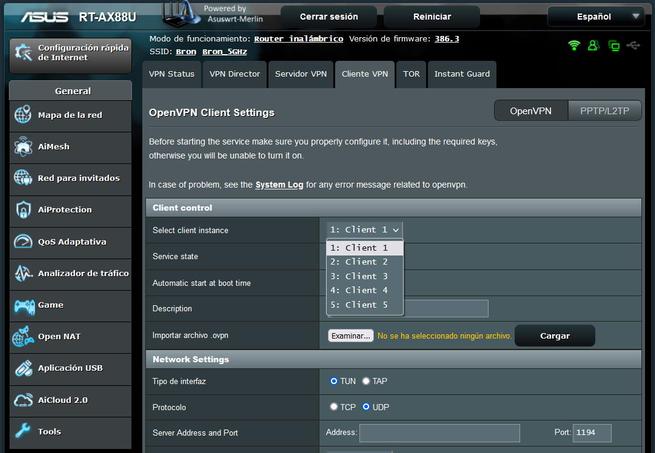 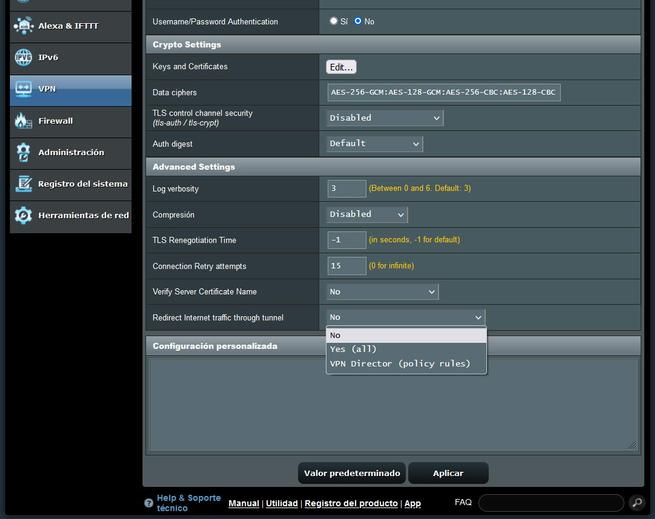 Internally the firmware will store VPN rules directly in JFFS memory, instead of storing it in the router’s NVRAM, to allow creating more advanced rules and releasing this NVRAM for other uses, for example, it goes from 350 characters to 4095 characters. Another important change is that now in OpenVPN clients we will have the possibility to manage the routing policy through VPN Director, in the section “Force Internet traffic through the tunnel” we can configure it as “Yes” to forward all the traffic, “No” to not forward all traffic, or “VPN Director” to properly manage routing. The Kill-Switch functionality can be configured in the “Yes” and “VPN Director” options, of course, if we manually stop a client the kill-switch will stop working, this will only come into operation in the event of a VPN tunnel crash or at firmware startup. 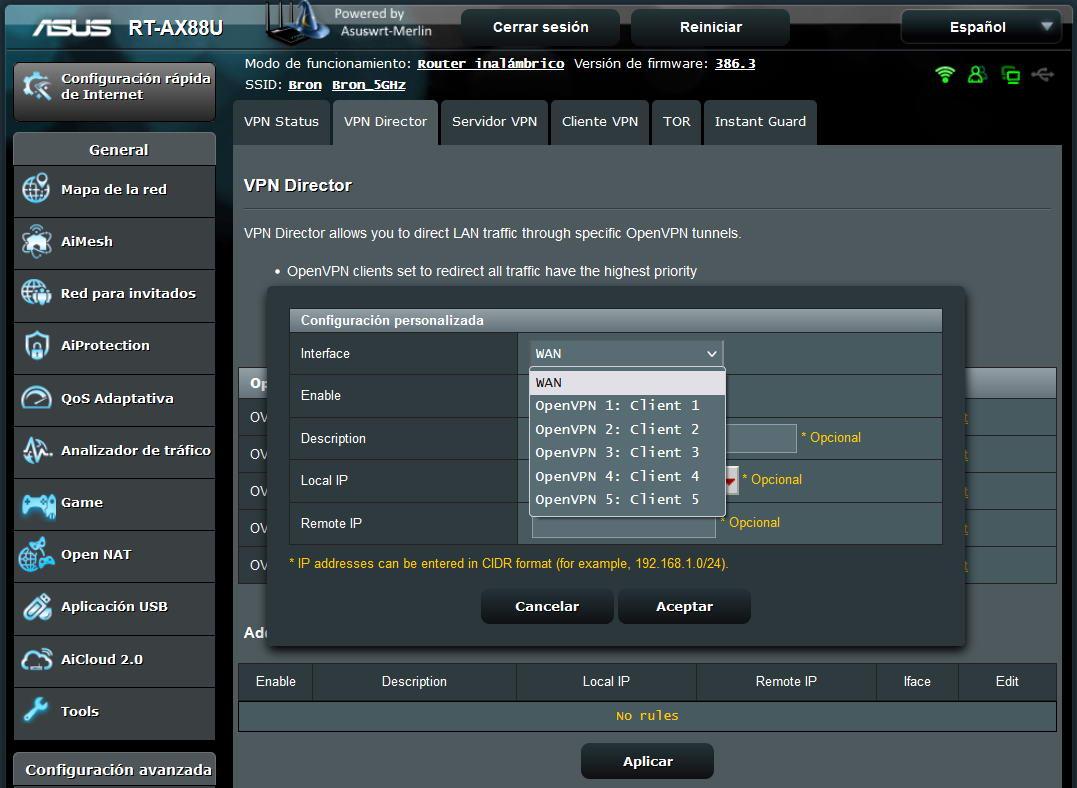 The possibility of connecting to WiFi networks by scanning a QR code has been with us for several years, for example, routers from operators and other manufacturers allow us to connect through this QR code without having to enter the name of the WiFi network and the password, in addition, the connection is fully automatic when scanning this QR code. Now, this new version of Asuswrt-Merlin 386.3 has incorporated this very interesting functionality. This functionality can be found in the “Network Map” section for the router’s main WiFi networks: 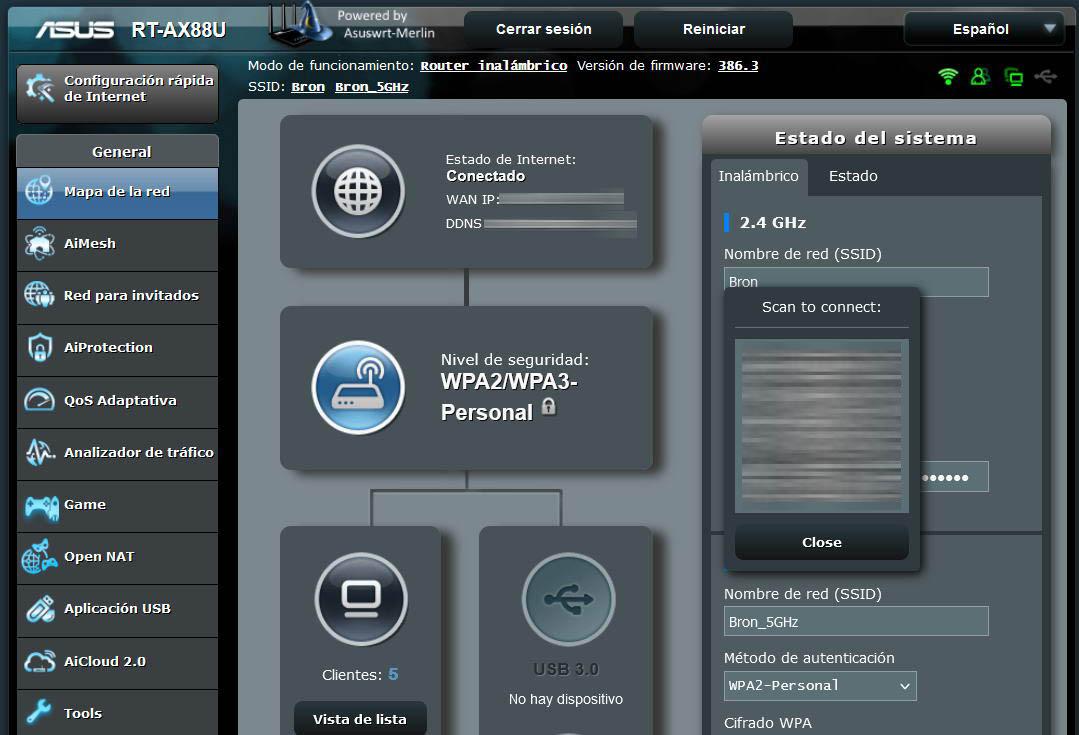 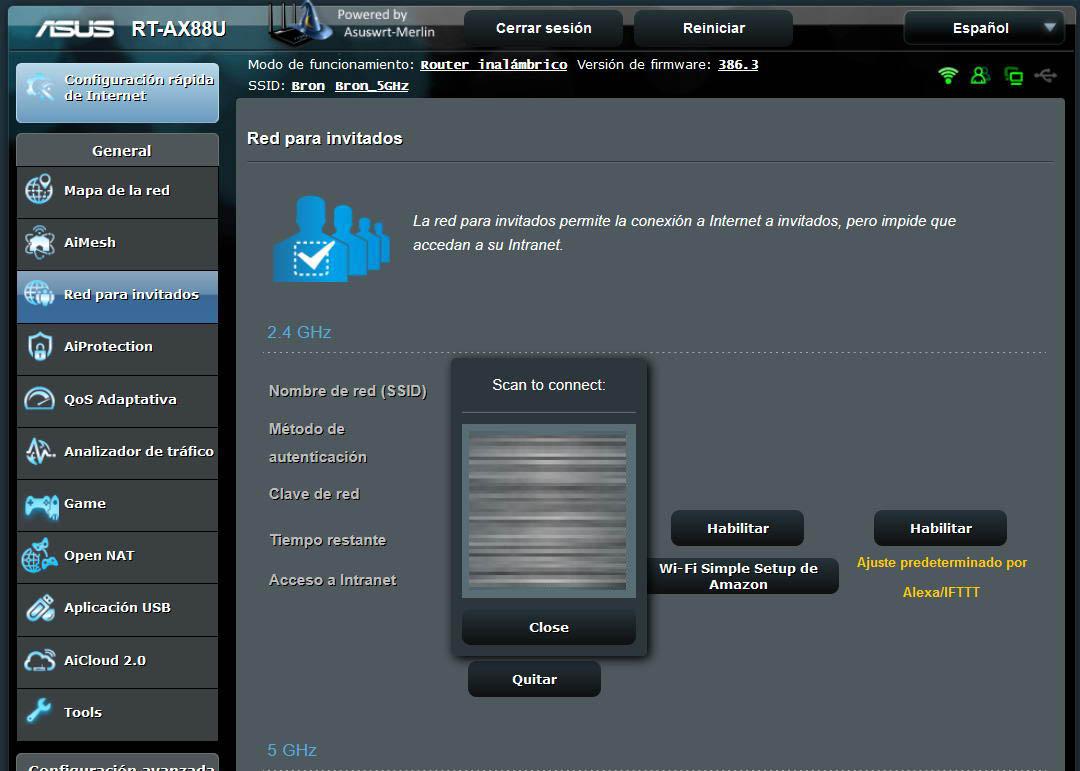 Other changes introduced in this new firmware version is the support for the BCM50991 chipset, which is the 2.5G interface that incorporates the ASUS RT-AX86U router. Included software such as nano, curl, dnsmasq, OpenVPN to version 2.5.3 and more have also been updated to the latest version. Certain bugs in previous versions have also been corrected.

You can visit the Asuswrt-Merlin official website where you will find the download of all the firmwares compatible with ASUS routers.

PhishTank: find out if a link is Phishing