Despite its young age and a rather late arrival in the smartphone market, Realme has managed to find a place for itself in this very competitive environment. In two years of existence, the brand already has more than 100 million users worldwide. If you too have fallen for Realme, this buying guide aims to help you better understand the manufacturer’s catalog, and therefore to choose the model that suits you best.

Our selection of the best Realme smartphones

Realme made its debut on the European market in 2019 with the Realme 3 Pro, a very interesting smartphone on paper for a price below the 200 € mark. And since then, the brand has continued to grow in popularity. It is known for its competitive smartphones which stand out for their excellent value for money.

The manufacturer thus plays in the same court as its compatriot Xiaomi (Redmi, Poco). It is one of the many subsidiaries of the BKK Electronics group which notably owns the Oppo, OnePlus and Vivo brands. However, the youngest of the siblings has an identity of his own and is not just another brand in the Chinese group’s portfolio. 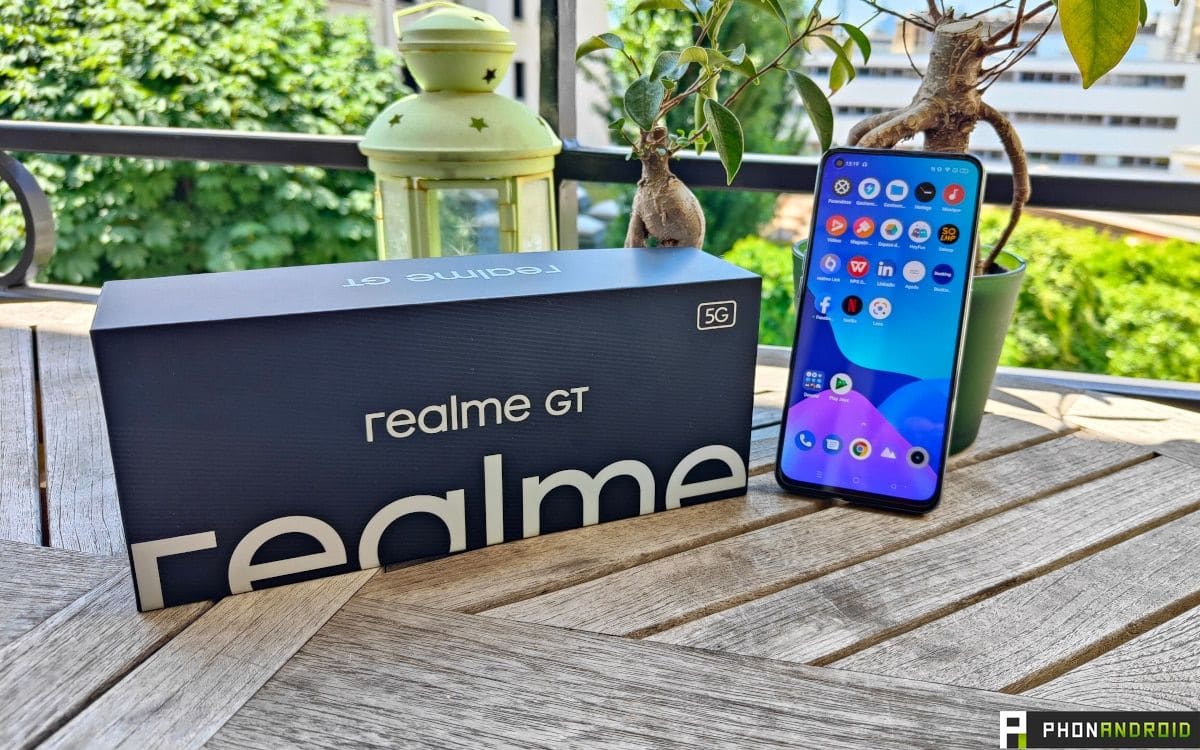 While waiting for the arrival of the Realme GT 2 and its Pro version which were made official on January 4, 2022, the Realme GT 5G remains the strongest model in the collection from the Chinese manufacturer. It has all the assets to seduce: a very competitive price for the quality of the smartphone, a high-end processor, ultra-fast recharging, good photo performance, etc.

To come to the characteristics strictly speaking, the Realme GT 5G is equipped with a processor Snapdragon 888 supported by 8 or 12 GB of RAM and 128 or 256 GB of internal storage. It therefore has nothing to envy to high-end Android smartphones in terms of performance. Whether for classic everyday use or for intense tasks such as video games.

The Realme GT 5G is equipped with a screen Super AMOLED Full HD + (2400 x 1080 pixels) of 6.43 inch. Its refresh rate is 120 Hz. For the photo part, the main sensor (wide angle) of 64 MP provides good performance day and night. It is supported by two other sensors: an 8 MP ultra wide-angle lens and a 2MP macro sensor for very close shots.

Finally, thanks to its 4,500 mAh battery, the Realme GT 5G of which here is our test offers an autonomy of a day and a half, or even more depending on use. Its fast charging of 65W allows it to go from 0 to 100% in 32 minutes barely. And if you don’t have much time, 12 minutes is enough to charge the battery to 50%. The smartphone is available at the best price on Amazon at 555 € in its blue version and 599 € in the yellow version. 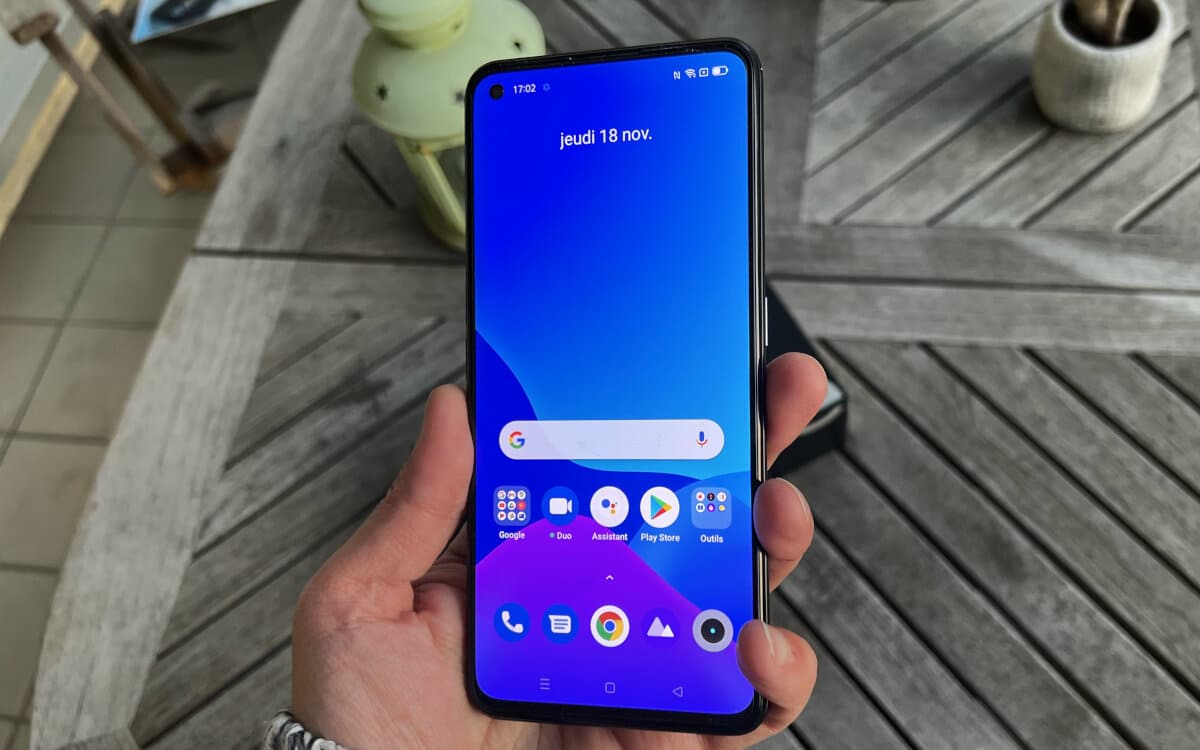 The Realme GT Neo 2 is a light version of the standard Realme GT, but is not to be confused with the GT Master Edition which we present just below. We are here on a mid-range model with exemplary performance since there is a Snapdragon 870 SoC, which offers power halfway between the 2020 Snapdragon 865 and the 2021 Snapdragon 888.

The smartphone therefore has little to envy the high-end models of the moment. It is available in 8/128 GB and 12/256 GB versions. 6.62 ″ Full HD + display is AMOLED type and offers a refresh rate of 120 Hz. Regarding the photo part, the GT Neo 2 shares the same technical sheet as the Realme GT 5G. We therefore have a main sensor of 64 MP which ensures very correct shots during the day and even in the evening thanks to the night mode.

To support it, there is an 8Mp ultra wide angle module and a 2 MP macro sensor. Selfies are managed by a 16 MP module. As you can see, the Realme GT Neo 2 takes most of the features of the standard GT, but has a less powerful processor. However, these performances are well above average in the mid-range segment. The smartphone is available at € 379 on Amazon. To find out everything, do not hesitate to consult our test of the Realme GT Neo 2. 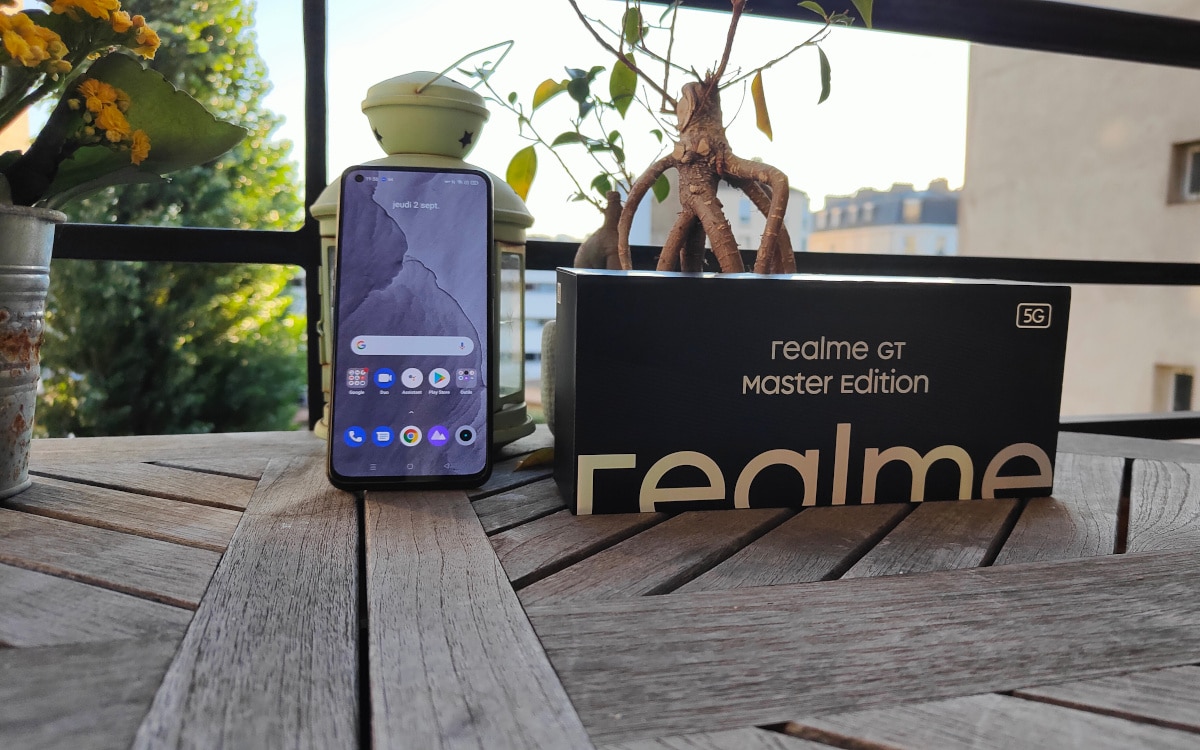 The second smartphone in the GT family, the Master Edition was launched in July 2021. It stands out with its watered-down technical sheet for an even more competitive price. The Realme GT Master Edition was offered at launch at 349 € in its version with 6 GB of RAM and 128 GB of storage and at 399 € in its 8/256 GB version. But at the time of writing, we have it. found cheaper at 299 € in the basic version.

The Realme GT ME has a SoC Snapdragon 778 5G midrange. Its performance is therefore below that of the standard Realme GT, but remains comfortable for the vast majority of everyday uses. The photo unit is made up of the same sensors as those of the GT and GT Neo 2 models. As for the battery, it has a capacity of 5000 mAh and is able to last two full days if you do not use the battery. smartphone with a lot of intensity.

The smartphone is not harmed in terms of fast charging since it supports a power of 65W that allows you to refuel from zero in 33 minutes. This is more or less the same charging time as that of the Realme GT 5G. 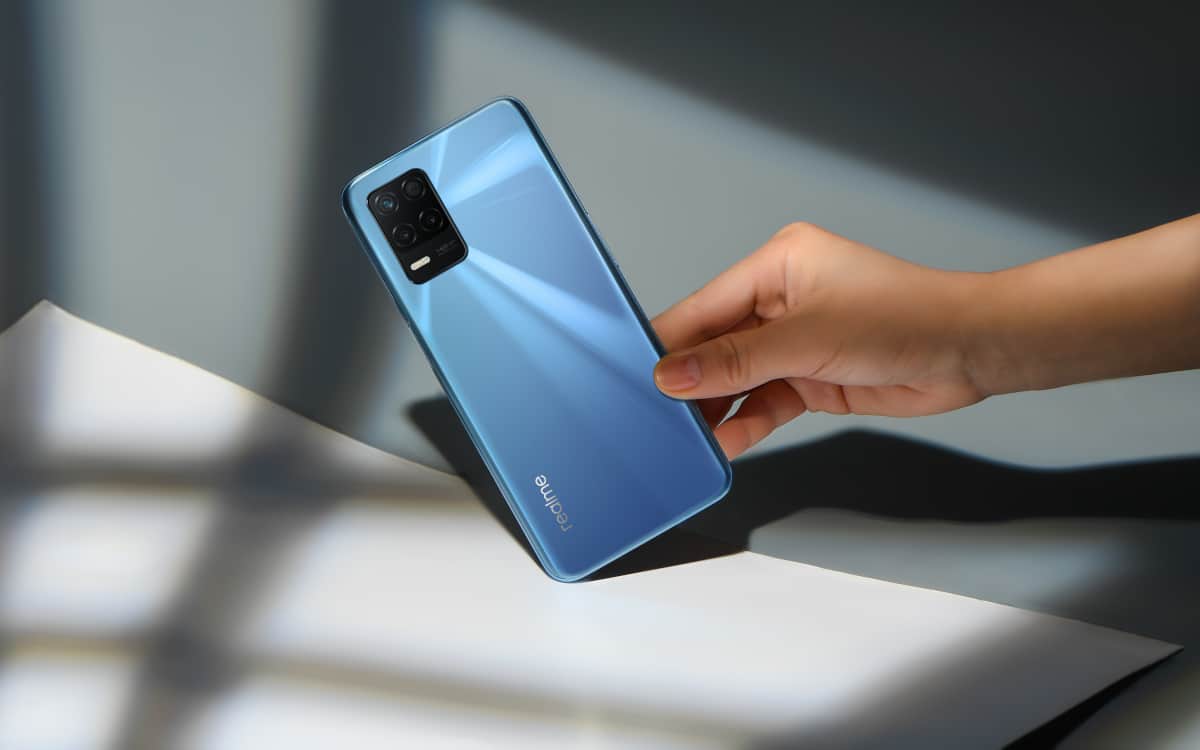 If you are looking for a powerful and affordable 5G smartphone, there are two models vying for the throne: the Reame 8 5G and the Redmi Note 10 5G which have a lot in common. In the Realme catalog, it is also the cheapest 5G model. It was launched at a price of 229 €, but this smartphone is difficult to find at the moment. It is available at the best price at € 214 on Amazon.

To come to the characteristics, the Realme 8 5G is equipped with a processor MediaTek Dimensity 700 supported by 4 GB of RAM, a 6.5-inch Full HD + IPS screen with a refresh rate of 90 Hz. Its 5000 mAh battery allows it to easily last a full day with relatively intensive use. But a rare thing on a Realme smartphone, the fast charge offered here only has a capacity of 18W.

Realme 8 Pro: more efficient than Realme 8, but without 5G 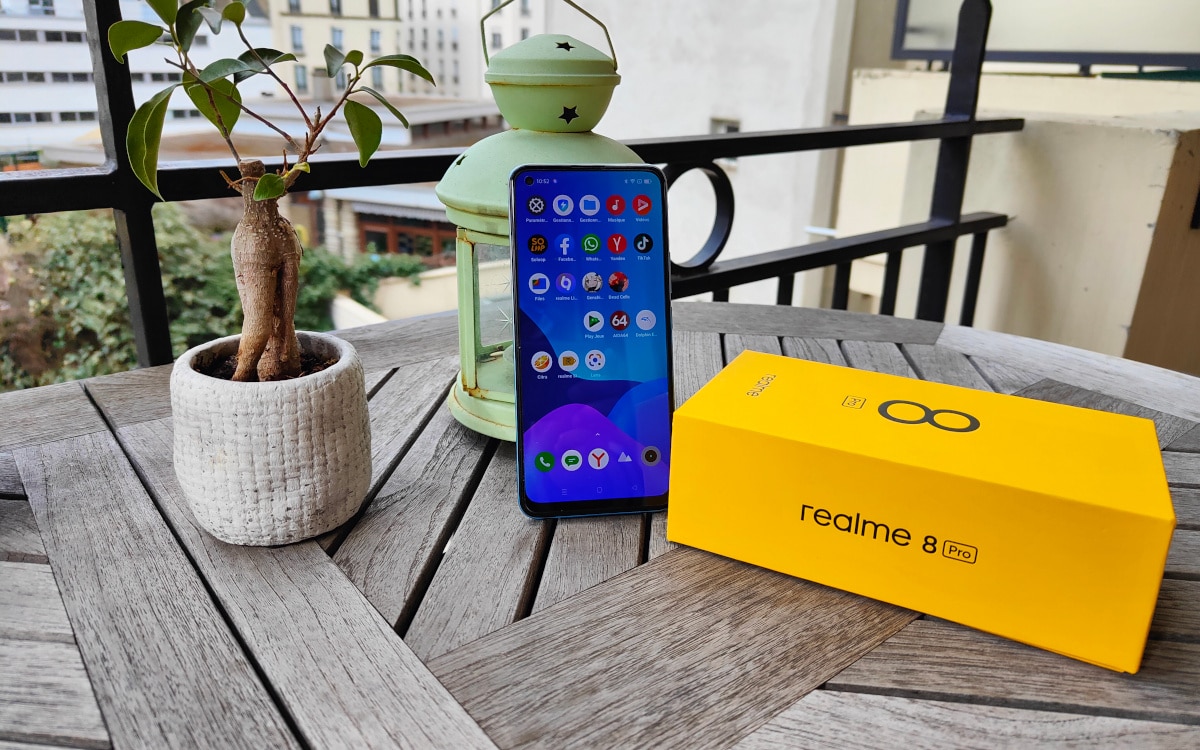 The Realme 8 Pro, as its name suggests, is an improved version of the Realme 8 in 4G version as in 5G. But surprisingly, the brand does not offer a 5G version for the Pro variant. This is a factor that could fully justify a hesitation between the two models. But if 5G isn’t a must for you, the Realme 8 Pro is a better smartphone in several ways.

It has a SoC Snapdragon 720G more efficient supported by 6 or 8 GB of RAM, a 6.3-inch Full HD + Super AMOLED display (Realme 8 5G has an IPS display), its main 108 MP sensor ensures better shots. And finally, its 4500 mAh battery is compatible with a 50W fast recharge which allows fully charge the smartphone in 47 minutes. 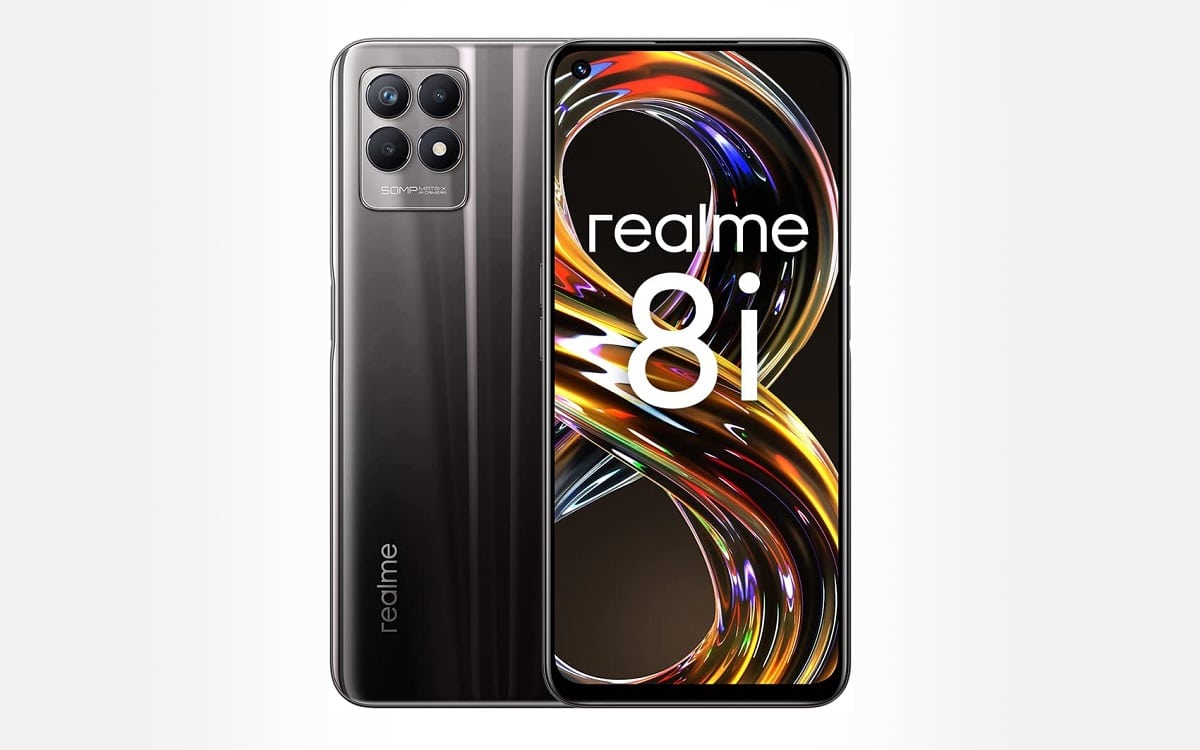 This is the low-cost model from the Realme catalog. Successor of the popular Realme 7i, the Realme 8i inherits the basics of its predecessor, which it improves on many fronts. The smartphone has a 6.6-inch IPS screen in Full HD + definition and trivializes the refresh rate of 120 HZ which is also in the game. For a smartphone that is currently displayed at € 169, it is a rather convincing technical sheet.

Under the hood, we find an octa-core processor Helio 96. The engraving fineness is 12nm, but the performance is decent for a smartphone of this price. The SoC is supported by 4 or 6 GB of RAM. We are not in front of a beast of power, but the Realme 8i will be suitable for the most classic everyday uses.

The photo part is managed by a triple sensor: a main module of 50 MP and two sensors of 2 MP (ToF and Macro. Finally, its battery has a capacity of 5000 mAh and is compatible with 18W fast charging.

📱Why buy a Realme smartphone?

In two years of existence, Realme has managed to make a name for itself in the smartphone market and this is no accident. The brand, which had more than 100 million users worldwide in mid-2021, is deploying a strategy that is not foreign to us. Like Xiaomi’s Redmi and Poco ranges, its smartphones come at very reasonable prices for an attractive spec sheet.

This is the case of the Realme GT which offers the characteristics of a high-end smartphone for an introductory price of 449 €. And if you are ready to make small concessions, the brand offers mid-range models performing under the bar of 400 €, even 300 €. This is particularly the case with the Realme GT Master Edition. Finally, for less than 200 €, you have the Realme 8i. It is an entry-level smartphone that provides decent performance for most people.

The other best smartphones by brand