The programming interface to use DirectStorage on PC was published a few weeks ago and the developers have not taken long to show the first tests of a feature that points to ways, increasing the performance of read operations of storage units in loading games.

If you follow us regularly, you already know what’s going on. Microsoft introduced this technology in the latest generation of Xbox consoles and promised that it would also bring it to PCs. In fact, it was one of the new features announced for Windows 11, although (without the same performance) it would also come to Windows 10.

Basically, the DirectStorage API on PC allows you to shift the workload from the CPU to the GPU by handling the data that arrives from the storage units. When using the dedicated graphics card for this task, the data goes from the SSD (or HDD) to the system RAM and from there directly to the graphics card’s VRAM. This achieves a much higher bandwidth, speeds up decompression tasks on the SSD and, incidentally, reduces the load on the processor. More clear: speed up loading times in games.

DirectStorage on PC, it works

The Luminous Productions studio (Square Enix) has made the first demonstration of this technology at the NVIDIA GDC 2022 conference. To do this, you have applied the DirectStorage API to a previous version of your Forspoken game. Although we assume that in reality it will not be so noticeable, the results in numbers are impressive.

The improvement of using DirectStorage on PC vs Win32 Storage API reaches 70% when using an NVMe solid state drive connected to the PCIe interface. Improvements are also noticeable when using SATA connected SSDs or even hard drives. Let us remember that it is a general API that can work on any storage system, although where the improvements are most appreciable and where all developers are going to focus are PCIe SSDs. 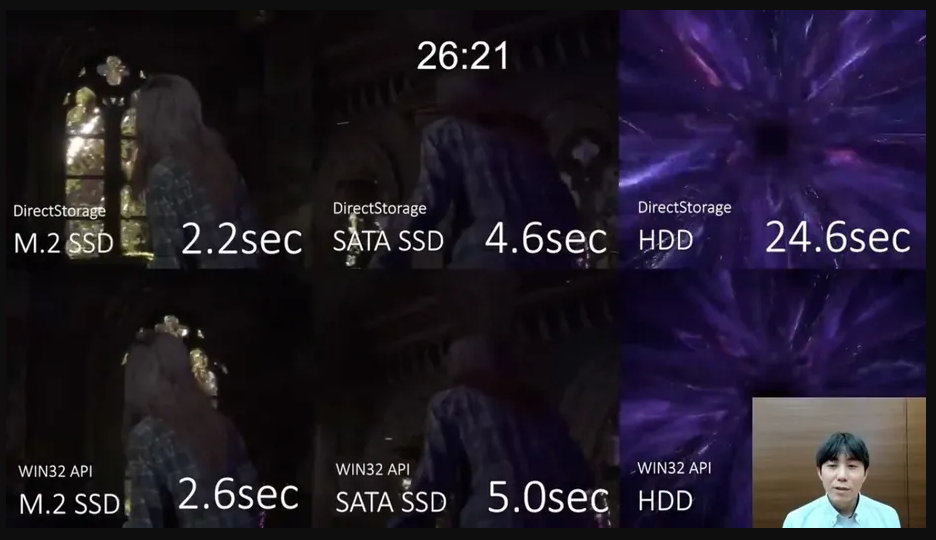 We will have to wait for developers to include this feature (included in DirectX 12) in their games, but it points to good ways and capacity to improve performance especially on the faster SSDs, compatible with NVMe and that exceeds 5,000 Mbytes per second in read mode, something that all units connected to PCIe 4 or the new Gen5 that we expect for this year do. This technology will be supported by NVIDIA GeForce RTX Series 20/30 graphics cards and AMD Radeon RX Series 6000 graphics cards.

Microsoft stated at the GTC that “DirectStorage would usher in a new era of fast load times and detailed worlds in PC gaming”. We will see.

Windows 10 and Windows 11 updates will have an expiration date