Although overshadowed by the news of iOS 16 and the arrival of the Apple M2 with a MacBook Air and a MacBook Pro, ipadOS 16, the new version of the operating system that governs Apple tablets, has also had its moment in the opening keynote of the WWDC 2022. And it is not for less, because the truth is that with this version, finally, one of the most awaited functions arrives (I would even dare to say that it is the first on that list) by iPad Pro users, and to a lesser extent also by those of the rest of the models.

And yes, as you can read in the title of this news, Apple tablets will finally offer flexible multitasking thanks to Stage Manager. a new feature in ipadOS 16 coming to iPad Pro and iPad Air users with the M1 chip that automatically arranges open apps and windows, always keeping the active window in the center, thus providing a environment in which we can quickly jump between them, without losing sight of all the information that we want to keep visible.

Stage Manager will allow you to create overlapping windows of different sizes in a single viewdrag and drop windows from the side or open applications from the Dock to create groups of applications, which we must also add that this new feature of ipadOS 16 will also be extended to external monitors with resolutions up to 6K, so we can completely customize the work area to adapt it to our specific needs. Apple has been stating for some time that its iPads are the great alternative to the PC, and without a doubt with this jump in ipadOS 16 they advance substantially in this regard.

Another very interesting novelty of ipadOS 16 is called free form and it comes from the hand of the combination of FaceTime and the Apple Pencil, which together offer us a new application integrated into the videoconferencing function of Apple devices. with this function we can create a collaborative workspace as a whiteboard, in which the participants of the conversation can simultaneously use the group video call. A very practical tool in teleworking environments, as well as for remote meetings. 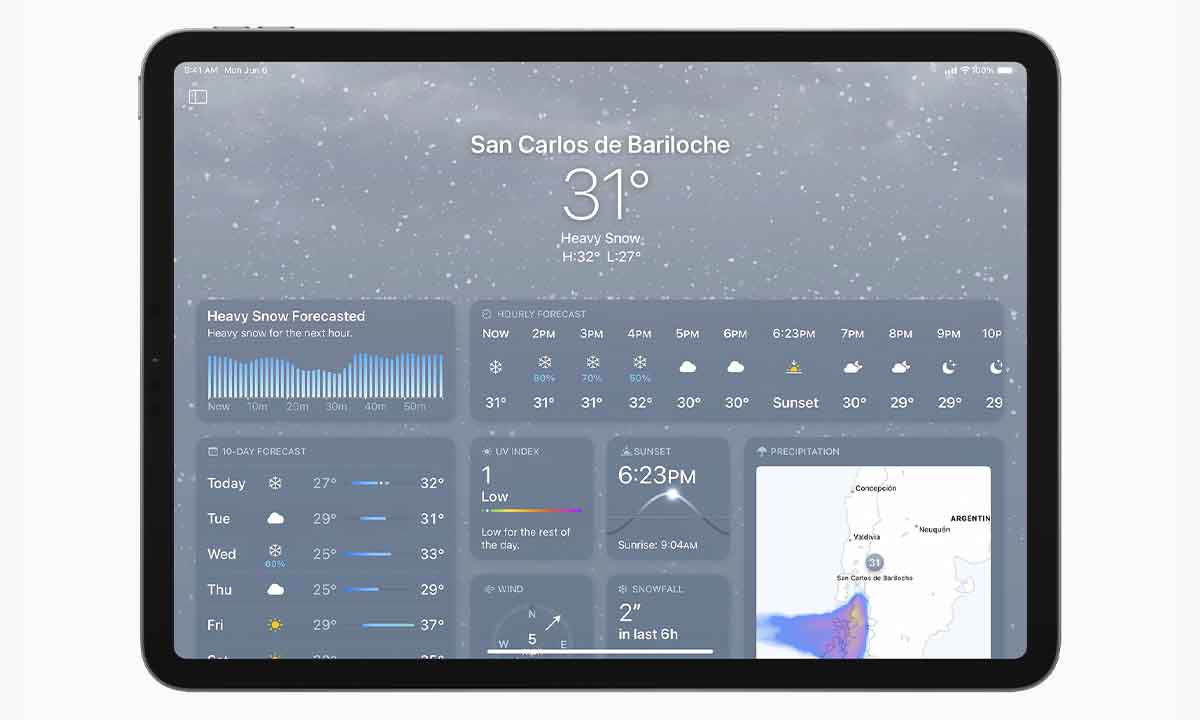 People who don’t use iPad will undoubtedly be surprised by this, but as incredible as it may seem, Apple’s tablet has never had a native weather app, something that is even more surprising when compared to iOS, whose Weather app is quite complete and practical. Fortunately, with ipadOS 16, iPad users will have a weather and environmental information app, just as complete as the one that iOS has been having for years. I don’t understand why it took so long, being so useful, but hey, better late than never.

Otherwise ipadOS 16 also adds part of the news that we have seen in iOS 16, like new features in Mail, Messages, iCloud Shared Library, and improvements to Live Text and Dictation. Thus, finally, despite not bringing as many new features as some leaks suggested, just because of the arrival of Stage Manager we are already facing a very important evolution and, therefore, a good reason to update to iPadOS 16. When? Probably between September and October this year, although developers can already start using it. How To Change Screen Brightness On Samsung Galaxy A50