If the x86/64 architecture is the absolute leader in the PC world, we can say exactly the same about ARM if we talk about smartphonestablets and other portable devices… with the difference, between the two cases, that ARM is beginning to eat away at x86/64 in its field, with Apple as the main responsible for this movement, which until a few years ago might have seemed something absolutely unthinkable .

This would not be possible without the constant evolution of the entire platform that makes up ARM, of course, so that each one of its announcements of new integrated or, to be more exact, of components for them, is a very important movement, since having very much in mind, in view of the evolution of the entire ecosystem based on this architecture. And today, without a doubt, is a most interesting day in that regard, because ARM Holdings has announced six new developments.

First let’s talk about the cores that make up the CPU which, in turn, is integrated into the SoCs. And in this regard we find three novelties, all of them aimed at the high range, and that we will surely see in a good part of the integrated ones of the flagship of the brands throughout the coming year.

The main protagonist is the ARM Cortex-X3, which, as you may have already deduced from its name, is called to be the replacement for the current top of the range, the Cortex-X2, which we can currently find in integrated devices such as the Snapdragon 8 Plus Gen 1. It will offer a maximum speed of 3.3 gigahertz and According to ARM, it will be able to offer 25% more performance than the Cortex-A2. The company affirms, and it is something to keep in mind, that this Cortex-X2 could also be used in integrated for laptops and desktops, precisely in line with what was mentioned at the beginning.

Together with this Cortex-X3, the cores have also seen the light today Cortex-A715, replacement for the Cortex-A710 which would exceed performance by 20%, reaching the level of the once top-of-the-range Cortex-X1, and a redesign of the Cortex-A510already present on the market since last year, but with the changes it has undergone in this revision it would have seen an improvement in performance of around 5% compared to the original version of last year. 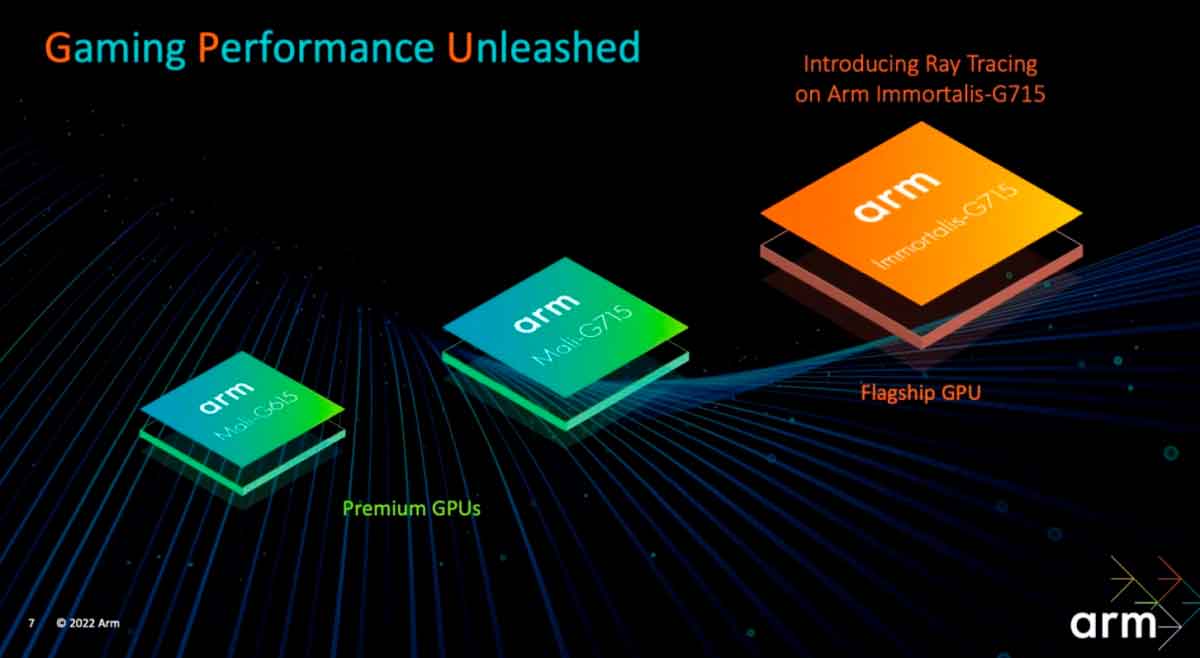 There are also novelties in relation to the GPU, with two new chips that are added to the Mali family, and a bombshell, Immortalis, a new GPU that we will only see in the most advanced devicesand that opens the doors to a new generation of devices.

Starting with the latter Immortalis, a GPU for smartphones and tablets with support for hardware ray tracing, thus following the path opened by Samsung with its Exynos 2200, the first smartphone GPU with hardware acceleration for ray tracing. Thisp will certainly be particularly well-suited for gaming devices such as gaming smartphones, which will also benefit from 15% more performance, 15% more efficiency and twice the AI ​​performance of the best graphics processors in the world. the previous generation.

The company has also presented the new Mali-G715 GPU (7 to 9 cores) Y Mali-G615 (6 cores or less) aimed at the premium segment (Immortalis aims directly at the top of the market range). Like the Immortalis-G715, these new GPUs will support variable rate shading and will have a new execution engine to improve performance and efficiency, but they will not have hardware support for ray tracing, something that we already could To imagine.

With these announcements, ARM puts us on the track of what we can expect from the top smartphones of 2023 and at least part of 2024, a period that could be especially relevant both in terms of proposals that play with the form factor (folding, rolling, etc.) and, although this will also depend a lot on the developers, gaming for smartphones. If the second half of this year is going to be very interesting in terms of PC technology, 2023 points to very interesting ways for the smartphone market.

The ideal IKEA desk to work with your partner from home

Tesla: the roadmap for the next products will be presented on January 26

WhatsApp: We tell you how to download Halloween stickers