Before leaving with our review of Don’t Look Up, let’s say it is a film that has hit the mark.

Arriving in a few cinemas at the beginning of the month, and then streaming on Netflix on Christmas Eve, it was especially with this latest release that the film sparked the interest of the public and critics.

If I had to try to imagine the director’s reaction Adam McKay or the protagonist Leo DiCaprio (whose commitment to the environment is known) to the excellent public response of the film, I would say that the two are rubbing their hands: not only for the success (or the perceived cachet) but above all because, for good or badly, they talk about it.

Because Don’t Look Up is exactly what it’s about: big issues – or big problems, if you prefer – taken lightly. From everyone. With us.

Our Don’t Look Up review

In short, without spoilers, the plot of Don’t Look Up.

Two American astronomers discover, during a telescope observation session, a gigantic asteroid on a collision course with the Earth: without decisive and immediate action, life on our planet is destined to end in just over six months.

Determined to bring the news to the President of the United States, they are shocked by the fact that the administration in charge takes little interest in the news, not listening to them and taking the matter very lightly.

Thus defying the government’s directives, the two astronomers decide to make the news public, but they will soon discover that even ordinary people are not interested in it and above all, their role as scientists is not taken seriously, with most of the attention that the issue deserves is instead absorbed by the end of the engagement of a pop star.

From here on, I’ll leave you to find out the rest. But I can assure you that it will be an abundant two hours of pure entertainment.

The cast of Don’t Look Up has been discussed a lot: it is in fact one of the most incredible lists of actresses and actors of recent years. It is not Adam McKay’s first experience behind the camera with so many and so good actors, think for example of The big bet.

But in this case we are really faced with a parade of stars to make even the asteroid pale. I won’t mention them all for the sake of brevity, but even just thinking about seeing probably the three best actresses from three different generations (I’m talking about Jennifer Lawrence, Cate Blanchett and Meryl Streep) together, well, it’s really impressive.

And in fact, if there’s one thing that’s really top notch in Don’t Look Up it’s the performance of the entire cast, J-Law above all else, and not just because he’s the easiest to identify with.

Also thanks to the grotesque vein so present in the film, the characters are really well characterized, often becoming memorable regardless of the screen time. We can even forgive the excessive caricature of the character played by Mark Rylance, the Bash tycoon so inspired by numerous contemporary mega billionaires, thanks to the staging of Streep’s President Orlean.

Cam, a Modern Family character, once said, “Meryl Streep could play Batman and it would (still) be the right choice.” From Bruce Wayne to Donald Trump the step was short (and the right choice anyway).

The director is good at knowing how to manage all these personalities on the screen, taking everything possible even from those who are told to us only for a short time, such as Chalamet or Perlman. Because if it is certainly easy to put so many big names on a poster; however, joining them together, without jostling, in a coherent narrative and reserving the right space for everyone, and no more, is to be appreciated.

The topics covered, a lot per kilo

The screenplay was written by the director himself. Despite many criticisms have been addressed to him regarding the monstrous amount of themes he wanted to address, being able to outline them only superficially, the narrative that has been created is coherent and above all familiar, because it describes our reality so well. Need to explain what denial is? The irritating frivolity of television infotainment? The obsession with gossip? Not to the homo sapiens of 2021.

In reality, Don’t Look Up spares no one, questioning, if not the moral integrity, at least the conduct of even those who are “on the right side”. The narrative arc that DiCaprio’s character experiences, in fact, gives an insight into how even many pure people find themselves dealing with the charm of the system that they criticize so much.

The elephant in the room, the big problem, never mentioned in the film, of which this story becomes a metaphor is of course climate change.

In enjoying the film we have all, I believe, thought numerous times about the pandemic situation we have been facing for almost two years. Well, despite the numerous points of contact between the most recent reality and the story told, Don’t Look Up is not about the pandemic. The great asteroid “kills planets” on a collision course with the Earth is not the small virus, but the even more subtle drama of anthropogenic global warming. 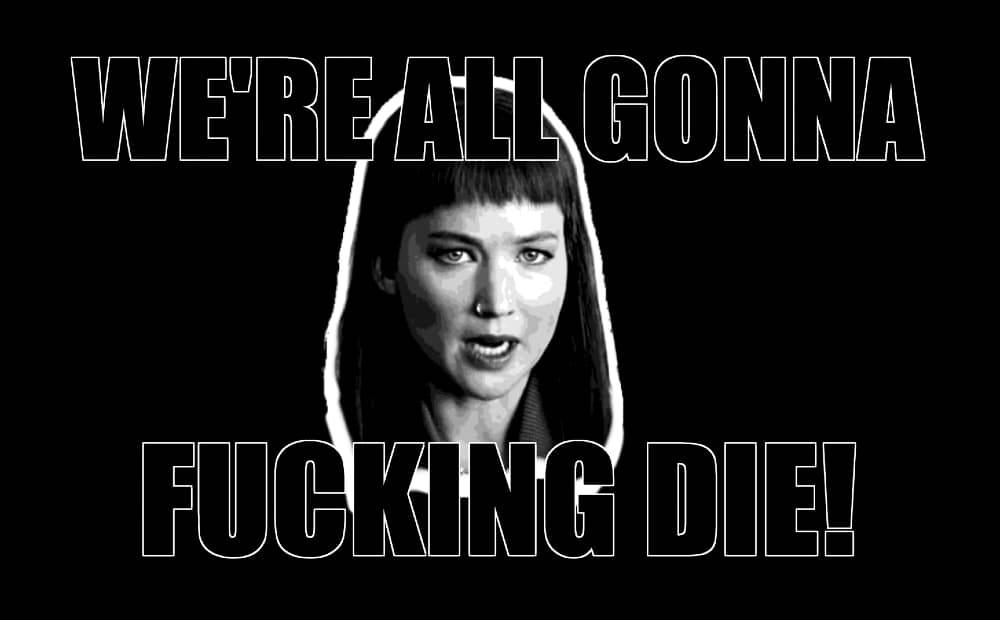 And yet, we are not facing a film along the lines of Armageddon or Deep Impact.

Don’t Look Up wants to mirror how we, understood as human beings in general and collectively, deal with this problem and with many others, to tell the truth. In this sense, the title of the film is prophetic: the problem is not the asteroid in the sky, but humanity on Earth.

So many themes, for one big theme: this we are, and so we are facing the greatest challenge that humanity has ever faced. Are we sure we want to continue in this way?

Although the narrative engine is a large asteroid pointing towards us, as we have said, we are not facing an apocalyptic blockbuster. Don’t Look Up makes a lot of use of CGI and special effects, but they are absolutely well done, when present, also because (especially in the final) they do not pretend to be excessive and faithful realism.

A good photography and a sparkling and dynamic montage are a non-invasive background to human comedy, what really interests us to see on the screen.

There is no need to spend more time on the technical aspects of the film, which do their duty well without adding (or distracting).

It was not easy to write the review of Don’t Look Up remembering that, after all, it is only a film, and not a look at the present and the future. Because there is so much inside of us.

Everyone’s impression on the film can only be influenced by their daily thinking, by how we relate to issues such as the environment, politics, online social life and trust in science. It can piss us off, feel superior, scream for do-gooders or catastrophes. And maybe they are all legitimate feelings.

But if, as the good Leo explains to us in the video you can see above, Don’t Look Up aspires above all to be a mirror of our society, it succeeds precisely because it is so easy to find many traits of similarity with the pandemic situation. We have lived in two years, for COVID, what has occurred for decades for climate change: denial, disinterest, superficiality seasoned with a good dose of “everything will be fine” without us doing anything.

The film runs well, also thanks to a good rhythm with no downtime or pauses in the narrative. There are a couple of steps that made me turn up my nose a bit, moments in which perhaps he went too far on the “message” pedal. Without giving too much away, I talk about the song and the montage at the end, when a polar bear is shown.

Don’t Look Up is not a perfect film, but it is a perfect film for our times. It carries a clear and important message (even if it doesn’t seem like it’s right all all have understood it correctly) that served, serves, will serve. But it represents, albeit in a caricatural way, our reality so well that it adds almost nothing to our experience. Which, of course, is a problem for a cinematographic work that is not documentary in nature. But it made us laugh and think, and maybe that’s enough.

If it has made at least one person open their eyes to a dramatic climatic situation, as well as to the superficiality to which we approach it, it will be worth it. Or at least, so I think: everyone, in his heart, must find his own answer.

Most importantly, the answer to the most important question of all: Why did a US general charge $ 10 for snacks that were free? 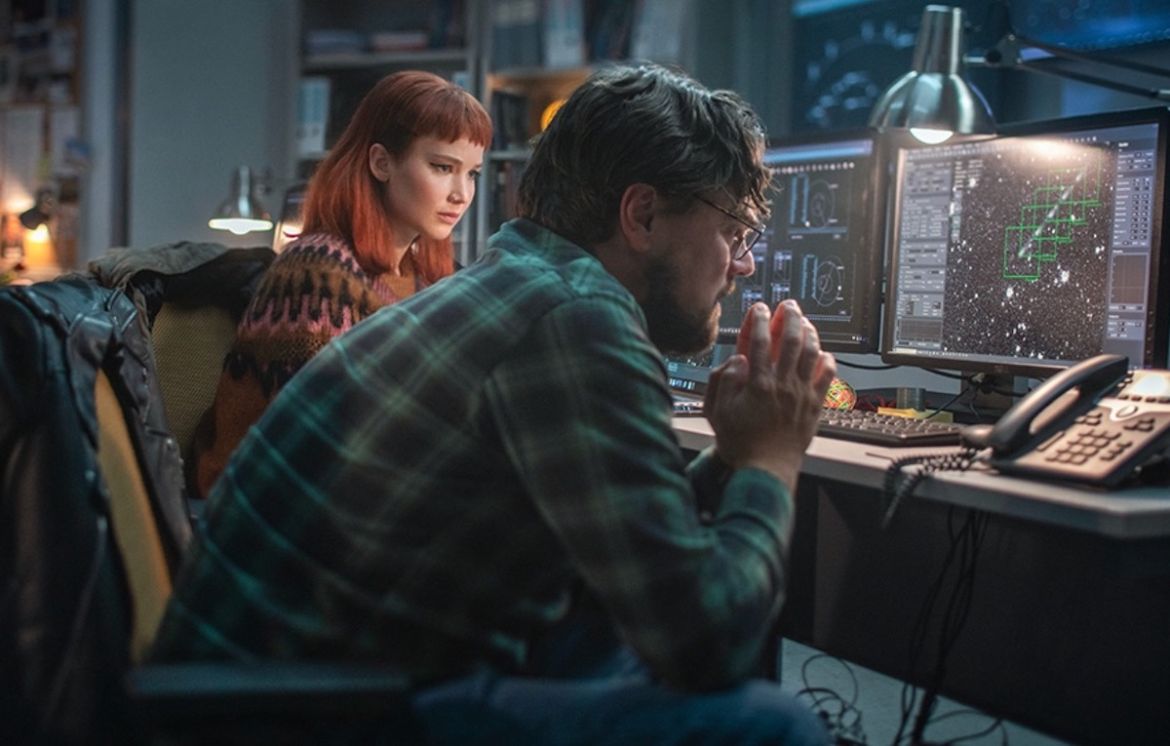 Don’t Look up is a good film and, without becoming a masterpiece, it brings with it an important message that should be listened to by everyone. A great cast provides great interpretations for a story that tells us nothing new, perhaps because it is too similar to what surrounds us in everyday life. We laugh, we reflect, we finish the vision a little bitter, but the one who laughs last laughs well.

But are we sure it’s not a documentary?

A couple of weaker passages, too didactic